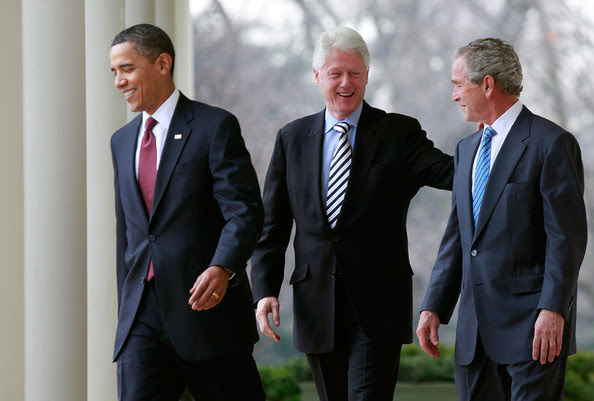 Financial Fraud Conviction Scorecard:
Bush: 1300+, Clinton: 1000+, : 0.0 (+/-)
Meanwhile, not a word of complaint from a single Democrat in Congress, which is especially infuriating given the broad bi-partisan agreement among voters that criminal bankers need to do time.  Too concerned with keeping up appearances and the next election cycle, neither side of the false left-right paradigm of American politics is capable of exposing its own filth when it comes to legitimate scandal, and this DOJ non-prosecution madness involving Goldman Sachs certainly qualifies as sordid.
Unfortunately, since it appears to the mainstream media that this is a partisan issue, and Obama is the anointed one, this story will get zero coverage.
---
DOJ Corruption Report via The Daily Caller
Excerpt:
“When we think of cronyism and the problems of cronyism and crony capitalism, we think in terms of economic loss and gain,” Schweizer said in a phone interview.  “What we’re showing here is that cronyism is now permeating our justice system.  So, it’s not just a question of dollars and cents, it’s a question of whether you’re going to face legal jeopardy or not on what you’re doing.”
“The issue of a revolving door — people who go in and out of, for instance, the Department of Energy who go work for energy companies then come back to the Department of Energy — is always there,” Schweizer added.  “But, we’re not used to associating the top leadership of the Justice Department with the revolving door.  And, I think that’s what makes this so troubling — because you can’t trust them.  All their financial interests are tied up with these large firms that do an enormous amount of business with Wall Street.”
In the report, GAI details how the George W. Bush and Bill Clinton administrations both actually took down  criminals — unlike the Obama administration.  Between 2002 and 2008, for instance, GAI points out how a Bush administration task force“obtained over 1,300 corporate fraud convictions, including those of over 130 corporate vice presidents and over 200 CEOs and corporate presidents.”
“Clinton’s DOJ prosecuted over 1,800 S&L (savings and loans) executives, senior officials, and directors, and over 1,000 of them were sent to jail,” GAI adds.
But, despite having “promised more of the same,” especially in the wake of the 2008 financial crisis, the Obama administration’s DOJ has not brought criminal charges against a single major Wall Street executive.
The Bush and Clinton administrations’ track records on prosecuting white-collar crime, and the Obama administration’s failure to do so, Schweizer said, is “evidence that this has less to do with some sort of partisan or philosophical issue.”
---
Here's a blurb on Bush Sr. directly from the GAI report:
William Black, an associate professor of economics and law at the University of Missouri,
Kansas City, and former financial regulator who tackled the S&L crisis in the 1980s, noticed
a difference in priorities between the federal government’s responses to the two crises.Black, a Democrat, notes the difference in priorities between the current administration and that of President H.W. Bush. He explains, “The first President Bush’s orders were to get the most prominent, nastiest frauds, and put their heads on pikes as a demonstration that there’s a new sheriff in town.” Black and other federal regulators handled the S&L crisis by securing a 90 percent conviction rate on over a thousand prosecutions.  Black bemoans the lack of “serious investigation of any of the large financial entities by the Justice Department, which includes the FBI.”
Read the full report on DOJ corruption...
***
Earlier:

Photo - Laughing on the way out... 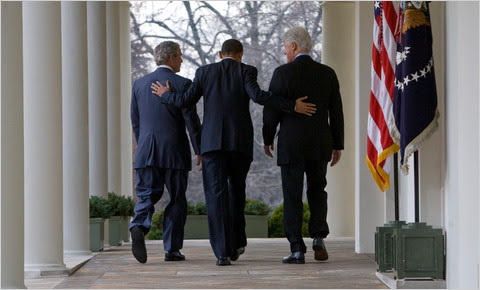 What's particularly galling is the DOJ's excuse for its wholesale failure to prosecute:

"Breuer: In our criminal justice system, we have to prove beyond a reasonable doubt that you intended to commit a fraud."

According to Lanny, the legal standard for criminal fraud--proving intent to defraud beyond a reasonable doubt--is just too high a hurdle for the boys at the DOJ. I wonder if Lanny mentioned to his law firm's compensation committee, then, just how easy it is to DEFEND fraud charges, since that's what Lanny did at Covington & Burling? Somehow, given Lanny's $2.3 million annual paycheck there, I imagine he was singing a different tune.

I have an idea. Why doesn't Lanny consult Bill Black on how to grow a set of actual, working balls and prosecute someone other than bingo-crazy grandmothers? Black successfully prosecuted over 1000 criminal financial executives during the S&L crisis, and you know what, Lanny, you abject coward? The S&L fraudsters' schemes had the blessing of the (then) Big Eight accounting firms--far and away a stronger defense to fraud charges than AAA ratings from nitwit rating agencies specializing in horseless barn downgrades.
Aug 7, 2012 at 11:15 PM | Cheyenne
As long as there are no criminal prosecutions this will continue we have become like a third world country where the rule of law doesn't apply to chosen people.

Where Are the Feds? NY Banking Superintendent: Standard Chartered a “Rogue Institution,” Made $250 Billion of Illegal Transfers With Iran