Though he is going head-to-head against the establishment, his first season went to air seamlessly. His second season experienced some issues. There was a lot of heat particularly on one of the episodes called Police State, which exposed the onset on a militarised war consitions style police and martial law state controlling the people. Needless to say the establishment did not like it (perhaps it was too truthful?). Anyway, both seasons have since been re-aired, all except this episode, they will not play it. Watch it and find out why..
Posted by Deb Simon at Saturday, November 03, 2012 No comments:

The Most Dangerous Book in the World:
9/11 as Mass Ritual, by S. K. Bain, Trine Day, 2012, 354 pages Book Review  (Abridged by henrymakow.com)
Anyone with an innate desire to understand themselves and the world will find a veritable feast in S.K. Bain’s discoveries.
Mind-baffling outrageous crimes have a certain logic, language, and dark humor that repeats itself again and again.

US Elections: From the “Lesser to the Greater Evil”. The Demise of Critical Liberalism

MUST READ: Exposing The Obankster In Obama 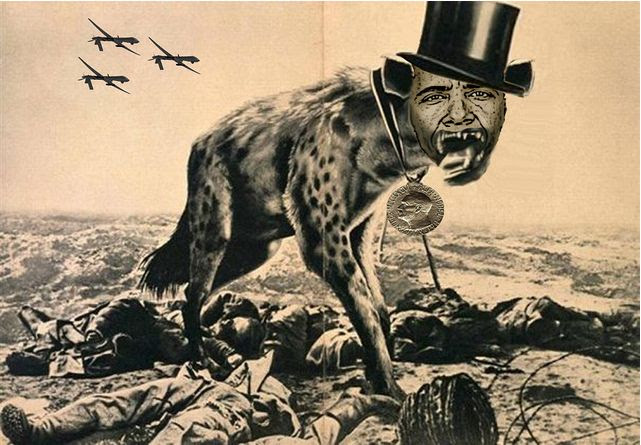 Obama’s Power to Trick Us Comes from Our Willingness to Be Tricked
Guest post submitted by Matt Stoller. Matt worked for Alan Grayson and Dylan Ratigan, and is now a Fellow at the Roosevelt Institute and a political analyst on Brand X with Russell Brand on the FX Network.  You can follow him on Twitter here.
Jokes reveal truths, which is why the best way to appreciate the real Obama, not the fabled character of hope and change, is how he tells jokes.  He’s good at, no, great at telling jokes.  He kills at comedic performances, and his sense of timing is magnificent.  Jokes, though, show how someone really sees the world, and the joke I’m thinking of is one he made during a speech in March 2009, when the revelations of AIG’s massive retention bonuses became public.  It had been less than two months since Obama’s inauguration, but the major policy framework of the administration – the bailouts – had been laid down.  The AIG bonus scandal was outrageous to the public, a symbol of tens of billions of taxpayer dollars being funneled to an arrogant corporation that had helped destroy the economy.
Barack Obama had stepped up to the lectern to deliver a stern rebuke to AIG executives who had taken bonuses with taxpayer money.  Obama talked of the outrage of an irresponsible company, and how his administration would do everything within its power to get the money back.  But a few minutes in, he coughed, slightly, choking a bit, as his mouth was a bit dry.  But after he coughed, he stopped, and reflected on the gesture with a joke.  ”I’m choked, choked with anger”, he said.  Obama chuckled.  Reporters laughed.  And it was funny, really funny.  Because everyone in the room knew that Obama wasn’t actually angry about the AIG bonuses, and never intended to do anything about it.  No one there was angry about the bonuses, and everyone knew nothing would happen to AIG executives.  The House would pass bills, which would die in the Senate.  The only people angry were Americans at large, who could not believe that their government worked for Wall Street.  So the joke was funny, ironic, cool.  But the moment wasn’t right for it, because this was a serious time for outrage – so Obama quickly reverted to form, and the teleprompter took over.
Obama Chokes Up With Fake Outrage Over AIG Bonuses
---
Pundits didn’t reflect on this “joke”.  No one really noted it.  It was very much like George Bush’s comment to reporters that was only later highlighted by Michael Moore, when Bush was on a golf course and perfunctorily said “we must find these terrorist killers….” and then turned to swing a golf club.  ”Now watch this drive.”  Obama had risen to that level of duplicity, not a lie in the conventional sense of saying something that wasn’t true, but an entirely constructed false persona.  He had polished the tools of the Presidency – the utter banality of PR, the constipated talking points, the routine abuse of power – and taken them to a new level with a self-aware sense of irony about his own narcissistic dishonesty.  His challenge was so outrageous – I dare you to call me on what a liar I am as I joke about how much I am lying to you right now – that he turned an obnoxious bluff into art.
Obama had shown this breathtaking tendency to con people as they knew they were being conned before, the most public time during the campaign being his cynical answer when he was asked about his promise to renegotiate NAFTA.  He had said, when fighting for union votes with Clinton, “I will make sure we renegotiate (NAFTA).”  Even as he said this, it turns out that campaign advisor Austan Goolsbee had gone to Canada to assure them this was a lie (sure enough, Obama’s trade policies are identical to Bush’s, or worse).  And once the election ended, and Obama was asked about his broken promise by a reporter, he gave the following answer.

“This is fun for the press to try to stir up whatever quotes were generated during the course of the campaign,” President Obama said during his Transition in early December, when a reporter asked him about criticisms he and now-Secretary of State Clinton had made about each other’s foreign policy views.
“They’re your quotes, sir,” said the reporter, Peter Baker of the New York Times.
“No, I understand. And you’re having fun,” Obama continued. “And there’s nothing wrong with that. I’m not faulting it.”

Universe Unraveling...the Fate of Those Who Do Not Love the Empire