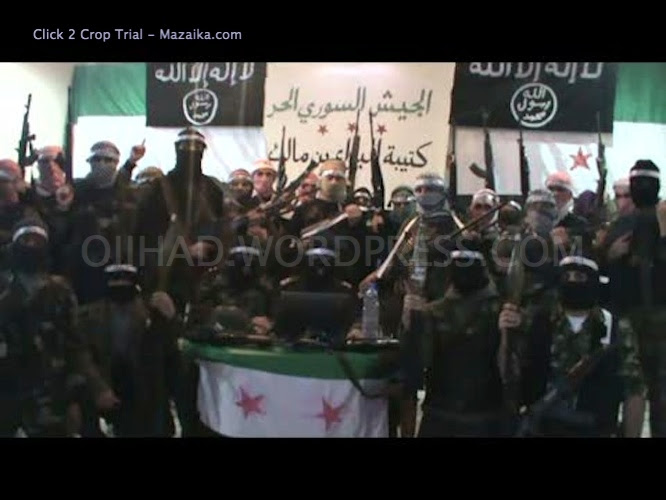 Washington and Al-Qaeda stand shoulder to shoulder in Syria.
It is hardly surprising that there is widespread approval, even outright praise, among the American foreign policy elite for Al-Qaeda's regime-destabilizing actions in Syria.

The not-so-secret alliance between Washington and Al-Qaeda in Syria has raised suppressed truths to the surface.

American and Western foreign policy decision makers cannot deny theirsympathy for Al-Qaeda, despite its image as a terrorist group that carried out the 9/11 attacks.

Of course, the group does not deserve this image since it was not responsible for 9/11. In fact, far from being an enemy, Al-Qaeda is Washington's biggest non-state ally in the Arab world.

Washington's cozy and strategic relationship with Sunni extremist cults and groups is something to behold. It is one of history's most treacherous alliances. But there is a reason for this. Washington finds itself in a difficult and awkward situation. It has a big need for hardened and driven fighters to carry out its cynical and immoral regime change plans in the Middle East and North Africa.

Al-Qaeda is an army waiting in the wings.

Should Washington take the moral high ground and reject Al-Qaeda's services, or exploit these fanatics to topple Assad's government and gain control of Syria?

You would think an empire as big as America wouldn't have to make this choice. American soldiers are naturally right for the job of regime change because they are seasoned warriors. But the American people don't want to see more Americans die in the Middle East for non-security related wars.

So what is Washington to do? Give up its superpower ambitions, cut off its ties to Al-Qaeda, Saudi Arabia, and Israel, mend relations with Iran, and restore sanity in its Middle East policy? That is asking too much. Washington is not home to sane, pragmatic, and sensible people.

Once Washington has taken the insane regime change path, it has no choice but to outsource because American public opinion is easier to manage if American soldiers are not dying in wars of choice.

The market for hardened fighters in the Middle East is mainly composed of Sunni Islamic extremists and ruthless mercenaries, who show no concern for civilians, even women and children. They make the best disposable soldiers because nobody is going to shed a tear when these scum die, not even in Washington where they are celebrated for their supposed fighting skills.

But the praise for Al-Qaeda by the regime change fanatics in Washington is not warranted. Numerous battles have shown that CIA-backed Al-Qaeda terrorists are no match for the Syrian army. Sure, they're good at wiping out a house full of women and children, but on the battlefield, when it really counts, they are unreliable.

If Al-Qaeda is defeated in Syria, the loss will be quickly turned around by Washington's propagandists as an excuse to militarily intervene and finish off the regime the old-fashioned way. And if Al-Qaeda succeeds in tearing away the muscle of Syrian institutions then Washington's excuse for intervention would be to limit Al-Qaeda and stabilize Syria.

Either way, Washington is prepared to intervene in Syria from whatever propaganda standpoint. If positive emotion works in popularizing an intervention, good, if not, then fear will do the trick.

The intervention will be sold not only to ensure the security of Israel, but also to defend the new infant Syrian democracy from the big bad Al-Qaeda wolves who are blowing down the front door.

III. Whose Revolution? The CIA, Al-Qaeda, And Islamists Reign Supreme


"At first, we thought that the Arab revolutions would liberate the region from the subordination to the West, only to discover that the West will always have the Arab world in the palm of its hand. The US has acted like the Caliph Harun al-Rashid, who calmly watched the cloud, knowing that he controlled its rain." - Akram Atallah, "Just How Revolutionary Are Arab Revolts If the US Is Involved?" Al-Monitor, August 7, 2012.

Who is winning in Syria? In the short term, the popular Assad government is holding on and defeating the foreign-backed Jihadist terrorists. They're winning because they have not been overthrown by NATO and the medieval Gulf monarchies, but the real fighting has not begun yet. The Kurds in the North are also winning, but Turkey is threatening to undo their gains. So it is still premature to declare anyone the winner.

Syria is a tricky situation. Let's look elsewhere. The clear winners of the Arab Spring in Libya and Egypt are the CIA, Al-Qaeda, and Islamist parties. Al-Qaeda runs Libya, the Muslim Brotherhood is on top in Egypt, and the CIAcontrols both organizations.

It's the CIA's world, we just live in it.

The CIA is manipulating Arab revolutions, and in some cases manipulating them from scratch in order to maintain U.S. dominance in the region. But the official narrative is that Arabs are shedding blood for freedom and democracy.

And according to Islamist propaganda, Al-Qaeda is killing innocent civilians in Syria not for the benefit of the CIA, Israel, and NATO, but for "Allah." These fanatical murderers believe that chanting this magical word after slitting the throats of their victims somehow erases their sins and crimes.

Obama tries to do the same thing when he applies the terms "militant" and "terrorist" to every innocent child he kills with his drones. Netanyahu is also guilty of this all too human behaviour.

Maniacs like Obama, Netanyahu, and the members of Al-Qaeda believe words can cleanse the blood on their hands. But whether they kill in the name of fighting "terrorists," or for "Allah," the result at the end of the day is the same: dead civilians.
Posted by Deb Simon at Wednesday, August 08, 2012