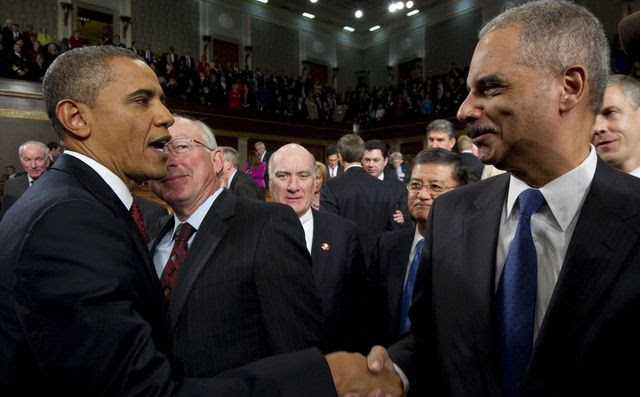 This is one of several, very interesting revelations from today's GAI report on corruption within the Obama Justice Department.  And remember, in our bought and paid for system, what you will read is completely legal.
---
Matt Boyle - Daily Caller
Excerpt:
GAI argues that the Obama administration’s decision to not go after Big Finance is due to senior DOJ leadership — Holder, Associate Attorney General Tom Perrelli, Associate Attorney General Tony West, Assistant Attorney General Lanny Breuer, Deputy Attorney General James Cole and Deputy Associate Attorney General Karol Mason — who “all came to the DOJ from prestigious white-collar defense firms where they represented the veryfinancial institutions the DOJ is supposed to investigate.”
The report details how Holder and Breuer both came to the DOJ from Covington & Burling, a “top-tier Washington law firm” with a client list that includes financial firms like Wells Fargo, J.P. Morgan Chase, Bank of America, CitiBank, Deutsche Bank, Goldman Sachs, ING, Morgan Stanley, UBS and Wilmington Trust.
GAI said that President Obama’s decision to choose Holder, “a white-collar defense attorney from Covington,” as his attorney general, over a “more fiery prosecutor,” appears to have sent “a subtle signal to the financial community” that this administration isn’t going to actually do anything, despite the harsh words.
As one of many examples of where Holder’s DOJ could have gone after Wall Street but failed, GAI cites how Michigan Democratic Sen. Carl Levin “proposed that the DOJ criminally investigate Goldman Sachs for its handling of the Abacus 2007-AC1 transaction” in an April 2011 Senate Permanent Subcommittee on Investigations report.
In that 635-page report, Levin and his staff — who are Democrats — recommended that Holder’s DOJ investigate potential crimes committed.  Levin’s subcommittee and the Federal Financial Crisis Inquiry Commission both made formal referrals to the DOJ for investigation – and Forbes magazine ran an article with the headline, “Criminal Charges Loom for Goldman Sachs After Scathing Report.”
Nothing happened.  But, over the course of the rest of 2011, Obama went on a massive fundraising drive down Wall Street.  “By the fall of 2011, Obama had collected more donations from Wall Street than any of the Republican candidates, and employees at Bain Capital had donated more than twice as much to Obama as they did to [Mitt] Romney, the firm’s founder,” GAI wrote in its report.
“In the weeks before and after the Senate report on Goldman Sachs, several Goldman executives and their families made contributions to Obama’s Victory Fund and related entities and some contributors maxed out at the largest individual donation allowed, $35,800.”
“Five senior Goldman Sachs executives wrote more than $130,000 in checks to the Obama Victory Fund,” GAI continued. “Two of these executives had never donated to Obama before and had previously only given small donations to individual candidates.”
---
Read the full report here:
Posted by Deb Simon at Tuesday, August 07, 2012