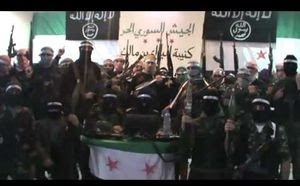 Death Squad: Free Syrian Army recruits proudly display the black flag of al-Qaeda, the database of Western mercenaries/terrorists
It was only a matter of time before NATO's hired killers were tasked with carrying out a massacre in Syria that NATO stooges at the UN could then attempt to blame on the Syrian government. This time however, the con job isn't going quite according to plan.

On Monday 28th May 2012 ('Memorial Day' in the US, for those who enjoy irony) the world's public received a full frontal propaganda attack by the Western and other duplicitous media outlets parroting NATO and UN Security Council condemnations of a "massacre by Syrian troops" in the Syrian village of Houla on Friday 25th May.

Although the Houla victims were Assad supporters, the media has been primed to unleash a torrent of abuse against the Syrian government in the hope that it will carry enough weight to justify precision-strike democratization in the very near future.

UN Security Council 'ambassadors' from the UK, Germany, France and Azerbaijan (no less!) wasted no time in pointing the finger at the Syrian government and making false claims that there was "clear evidence of artillery fire and tank shelling by the Syrian regime". In fact, it has since been revealed that the vast majority of the victims were killed at close range, many of them with limbs hacked off by axes. 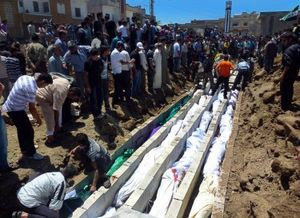 Houla massacre victims buried together in a mass grave.
Think for a moment about the phony narrative that the defenders of Western 'democracy' are trying to foist on the public: we're all supposed to believe that the Syrian army fired tank shells at these people, then withdrew from the area, allowing 'al-Qaeda-in-Syria' to line up the bodies, take photographs and video footage of the gruesome deeds and post them all over the web. Furthermore, the only available video footage taken at the scene of the massacre shows a man dressed in plain clothes emerge from a side street to fire an RPG into the street, footage that was rapidly propagated as "Syrian forces shelling their own people."

It has already been well and officially documented that there are hundreds of US, Israeli and British-backed mercenaries operating in Syria and armed to the teeth with American weapons. Their job is to create chaos and fear through the indiscriminate murder of Syrian civilians and thereby provide Western war mongers with the justification to intervene militarily or, they hope, force the removal of President Assad. Even the nutty UN Secretary General Ba Ki Moon acknowledged 10 days ago that 'al-Qaeda' were behind the many car bombings that killed so many innocent Syrians.

Back in April 2011, one such 'al-Qaeda' mercenary leader stated that his job was "to open fire on protesters in order to sow disarray and lead people to believe that the security forces was shooting on the demonstrators." So who exactly is arming and paying these professional hit men? Because at the rate that top Syrian officials are being picked off in spectacular car bomb attacks and targeted assassinations, we're obviously not just talking about a bunch of rag-tag jihadis fueled by religious fervor. Could the fact that agents of Western states have been caught fighting alongside 'al-Qaeda' in Syria on more than one occasion have anything to do with it?

Yet any significant mainstream media mention of 'al-Qaeda' being in Syria is vanishingly rare because, in this case, 'al-Qaeda' (the hired mercenaries) are playing the role of the 'good guys', a.k.a. the Syrian Free Army. Just as in Iraq, the goal of NATO killers in Syria is to generate as much mayhem and bloodshed to allow for the plausible 'reality' of an impending 'civil war'. After all, civil war is terrible and must be averted, even if it means bombing the country back to the stone age and then moving in and taking over. Ultimately, the people have to be protected from themselves, right? Just ask the 40,000 people blown to kingdom come under the "responsibility to protect" mandate gifted to NATO by the UN last year in Libya. 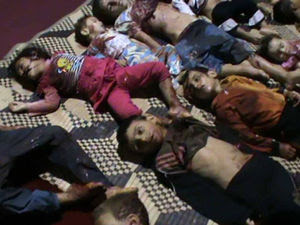 The bodies of Syrian children killed in a barbaric massacre by Western-backed 'al Qaeda' mercenaries calling themselves the Free Syrian Army. They deliberately murdered children from close range because they knew it would cause most outrage in Westerners and would result in clamouring for 'regime change'
Syrians voted overwhelmingly (like, 90%) in favour of constitutional reform not two months ago. No matter, the Western powers are determined to teach them a lesson in 'democracy', literally transporting the same weapons they used to break the backs of Libyans across the Mediterranean Sea for re-use against Syrians.

Also of note is the fact that the massacre took place just one day before the arrival of the UN's so-called peace envoy, Kofi Annan. So let's think about this: the Syrian government is well aware that international media spotlight was about to fall on Syria, so in an inspired move, they decide to engage in the worst PR imaginable by ordering Syrian troops to kill dozens of innocent men, women and children! That's some pretty slick diplomacy right there. But of course, we forget, Assad is a madman who doesn't know what he's doing, right? We're supposed to believe that together, he and the Syrian government haven't a pair of neurons to rub together!

Worse still is the fact that the Western media journalists appear to be so goddamn stupid that they can't see through this ruse and figure out that CLEARLY this is a set-up to profoundly demonize the Assad government! And throughout it all, 'we the people' are meant to suck it all up, while ordinary Syrians are massacred and told that salvation will arrive in the form of NATO carpet-bombing. Here we are in the globalized, 21st world of super-fast communications and no one can hear or see what is really going on in Syria, despite the fact that it is staring them in the face! The Assad government is battling as best it can to fend off the 'tsunami of lies' and violence washing over Syria, but it has long since lost the propaganda war and is mocked daily for saying that the US, Israel, UK and friends are behind the atrocities.

When it comes to drumming up support for war against Iran, propaganda about its non-existent nuke program is laundered by Western intelligence agencies through the MEK terrorist cult. In the case of Syria, all these reports of horrors committed by the Syrian military come through the London-based 'Syrian Observatory of Human Rights' and the 'Local Co-ordination Committees', based on mythical 'activists in Syria'. Western media just recycle their garbage and present it as 'the news', without bothering to check who is actually doing the killing.

If, despite the evidence thus far that you have been totally deceived (yet again!), you are still unable to grasp what is really happening in Syria, consider this piece of buried historical fact: 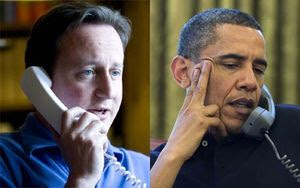 History repeats
In late 2003, the year of the Iraq invasion, Matthew Jones, a Reader in International History at London's Royal Holloway College, discovered"frighteningly frank" documents: 1957 plans between then UK Prime Minister, Harold Macmillan, and then US President, Dwight Eisenhower, endorsing "a CIA-MI6 plan to stage fake border incidents as an excuse for an invasion (of Syria) by Syria's pro-western neighbours."

At the heart of the plan was the assassination of the perceived power behind then President Shukri al-Quwatli. Those targeted were Abd al-Hamid Sarraj, Head of Military Intelligence; Afif al-Bizri, Chief of Syrian General Staff, and Khalid Bakdash, who headed the Syrian Communist Party.

The document was drawn up in Washington in the September of 1957:

"In order to facilitate the action of liberative (sic) forces, reduce the capabilities of the regime to organize and direct its military actions ... to bring about the desired results in the shortest possible time, a special effort should be made to eliminate certain key individuals.

"Their removal should be accomplished early in the course of the uprising and intervention, and in the light of circumstances existing at the time."

"Once a political decision has been reached to proceed with internal disturbances in Syria, CIA is prepared, and SIS (MI6) will attempt to mount minor sabotage and coup de main (sic) incidents within Syria, working through contacts with individuals.

"Incidents should not be concentrated in Damascus ... care should be taken to avoid causing key leaders of the Syrian regime to take additional personal protection measures."

Furthermore, a "necessary degree of fear .. frontier incidents and (staged) border clashes", would "provide a pretext for intervention", by Iraq and Jordan - then still under British mandate.

Syria was to be "made to appear as sponsor of plots, sabotage and violence directed against neighbouring governments ...the CIA and SIS [Her Majesty's Secret International Service, MI6] should use ... capabilities in both psychological and action fields to augment tension."

Incursions in to Iraq, Jordan and Lebanon would involve "sabotage, national conspiracies and various strong arms activities". These were, advised the document, to be blamed on Damascus.

So there you have it folks: the same tired old 'blunt instrument' tactics have been pulled out once more. How many more times are we going to buy the outrageous BS that is being repeatedly serving up to us? If it's left to Western governments and Western media moguls, they'll keep on bullshitting us till the day we die, because clearly they are convinced that citizens of Western nations are utter imbeciles with the collective thinking capacity of a turnip. 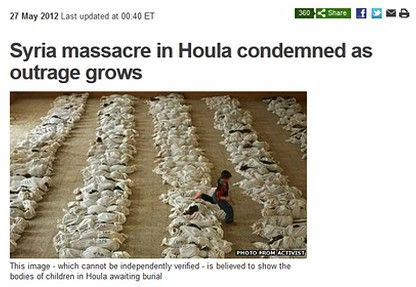 The photograph was actually taken by Marco di Lauro in Iraq in 2003. Note the attribution in the bottom right corner of the photo - 'PHOTO FROM ACTIVIST'
Maybe they're right because apparently it's too much for the average person to see past the 'shock and awe' and use their god-given brains for a moment and understand what it's obviously all about: natural resources, military budgets, defense contractor profits and the joy of killing.

Western powers want Assad gone because he stands in the way of Caspian Sea oil pipelines reaching Israeli refineries and ports. Assad out of the way also facilitates overt Western intervention in Iran. So it was no surprise in the aftermath of the Houla massacre that the psychopathic Israeli government, led by the eminently deranged Benjamin Netanyahu, naturally jumped at the chance to not only condemn Assad, but to claim that Iran and Lebanon were responsible too and that they should be dealt with along with Syria! Seriously, it would all make for a wonderful, dark, farcical comedy if the production costs weren't being counted in liters of innocent blood spilled. 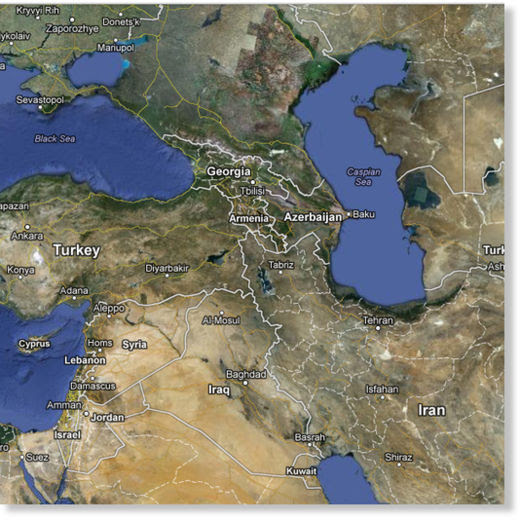 For its part, the American government has been sitting relatively quietly, tomahawk cruise missile in hand, waiting for the moment when they get the green light to start the killing (and profit-making) in earnest in the form of 'humanitarian intervention' from on high. In a move that was undoubtedly centrally coordinated, Syrian ambassadors have today (29th of May) been expelled from the US, UK, France, Germany, Italy and Australia.

It's Vietnam, it's 9/11, it's Afghanistan, it's Iraq, it's the London and Madrid bombings, it's Libya all over again people, and apparently too few have had enough of it yet. So let's all just sit back and watch the next round of slaughter in the name of 'freedom and democracy' and placate ourselves by sucking up some more outrageously implausible lies so that we can continue to believe we are NOT living under a brutal bloodthirsty empire run by child-murdering monsters in suits.