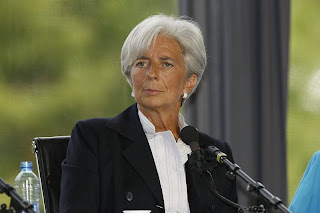 IMF boss condemns the Greek for avoiding tax. But Christine Lagarde pays NOTHING on earnings of £350,000

Tags:
The head of the International Monetary Fund enjoys a tax-free income of £350,000, it emerged yesterday – days after she attacked Greeks for failing to pay their taxes.
Christine Lagarde provoked a furious backlash after blaming Greece’s economic plight on citizens ‘who are trying to escape tax all the time’.
Now it has been revealed that the divorced Frenchwoman, 56, earns a salary of £298,926 which her contract states ‘shall be net of income taxes’.

Lagarde is ignoring the fact that much of the Greek debt came not from taking care of Greece but from an underhanded deal between Papandreou and Goldman Sachs to use currency swaps to conceal the true scale of the Greek debt problem from the EU and ECB. That is clearly fraud and not in the best interests of the Greek people, so why should they agree to pay that portion of the debt? There is a recognized principle in international; law called "Odious debt" which states that the people of a nation may not be held liable for the debts incurred by a government that are not spent on the people's needs. That includes wars, gifts to other governments, corruption, and money spent to spy on and repress the people. But Christine Lagarde has revealed herself as a true money-junkie, convinced that the only reason to allow the poor to live is so that they may pay the debts of the rich no matter how the debts were created.
Posted by Deb Simon at Wednesday, May 30, 2012