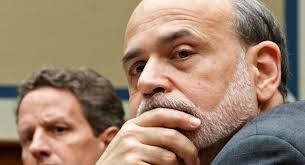 The Real Reverse Robin Hood: Ben Bernanke And His Merry Band Of Thieves

Print Version
Source: Zero Hedge
Submitted by Charles Hugh-Smith of OfTwoMinds blog,
Away from the stifling media crush, staid Ben Bernanke is dashing Reverse Robin Hood, lackey pawn of the Neofeudalist Financial Lords who shamelessly steals from the poor to give to the parasitic super-rich.
Amidst electioneering chatter about a “reverse Robin Hood” who steals from the poor to give to the rich, it’s important to identify the real Reverse Robin Hood: Ben Bernanke and his Merry Band of Thieves, a.k.a. the Federal Reserve. It’s especially appropriate to reveal Ben as the real Reverse Robin Hood today, as the Chairman is as omnipresent in the media as Big Brother due to the Cargo-Cult confab in Jackson Hole, Wyoming.
Please answer the following questions before launching a rousing defense of the All-Powerful Fed and its chairman:
1. What is the nominal yield on your savings account, thanks to the Fed’s zero-interest rate policy (ZIRP)? (Answer: 0.25%)
2. What is the inflation-adjusted yield on your savings account? (Answer: – 2.25%)
3. What is the rate of interest the Fed charges banks for “free money”? (Answer: 0%)
4. What is the average interest rate for bank-issued credit cards? (Answer: 14.52%)
5. What is the interest rate for student loans? (Answer: 6.8%, and 7.9% or 8.5% for PLUS loans)
6. Does the Fed pay interest on the funds banks have borrowed from the Fed for 0% and then deposited with the Fed? (Answer: yes)
7. Exactly how has the average American worker benefited from the Fed’s policies? (Answer: interest on credit cards has declined from 19.9% to 14.52%, if the worker has outstanding credit, which few of the bottom 90% do.) Theoretically, workers could re-finance their homes at lower interest rates, but the vast majority are either underwater or no longer qualify. Ben and the Merry Thieves love pulling Catch 22.
8. How has the average parasitic Neofeudalist Financial Lord benefited from the Fed’s “rob the poor to give to the rich” policies? (Answer: Handsomely. The top 1%’s income and net worth has soared as Ben and his Merry Band of Thieves have stripmined interest income from the poor and pension funds and diverted it to the rich.)

9. Have the Fed’s Reverse Robin Hood policies narrowed income disparity in the U.S.? (Answer: no–income disparity has widened further as a result of Fed goosing of risk assets.)
10. How many of the nation’s 14.5 million unemployed have gotten jobs as a result of Fed policies who would not have gotten a job if the Fed had been abolished in 2009? (Answer: unknown, but the best guess is 17, including Bennie the part-time janitor, with a statistical error of + or – 17.)
11. How does Ben the Reverse Robin Hood justify his thievery? (Answer: he doesn’t. Officially sanctioned propaganda casts him in the role of selfless do-gooder, protecting saintly Neofeudalist Financial Lords from restless debt-serfs.)
Listen up, debt-serfs, you have it good here on the manor estate. You get three squares of greasy fast-food or heavily processed faux-food a day, and if Reverse Robin Hood and his Merry Band of Thieves is ripping you off it’s for a good reason: the predatory Neofeudalist Financial Lords need the money more than you do, as they have a lot of political bribes to pay: it’s an election year, and the bribes are getting increasingly costly. Poor things, we’re sure you understand. Now go back to work or watching entertainment (or “news,” heh) and leave the Lords alone.
Posted by Deb Simon at Sunday, September 02, 2012