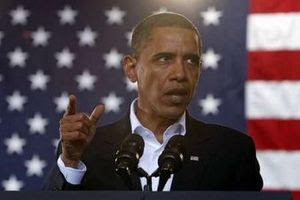 The Face of the Killer Who Is Your President


“Ask Osama bin Laden and the 22 out of 30 top al-Qaeda leaders who’ve been taken off the field whether I engage in appeasement,” the president fired back at an impromptu news conference at the White House.
“Or whoever’s left out there,” he added. “Ask them about that.”

Watch the video at the link provided above. It’s instructive, particularly Obama’s expression when he adds, “Or whoever’s left out there.” He speaks of murder, yet the words are breezy and casual: this is a murderer so used to killing that he talks of his past and future victims interchangeably, and in terms of approximation. Just “whoever’s left out there.” He wants to be sure you know he’ll order all of them killed in time. His face is expressionless, the eyes dead. This is a man without a soul in any healthy, positive sense. He murders — and he’s proud of it.
More than a million innocent Iraqis were murdered as the result of the United States’ criminal war of aggression on that country. Obama has heralded America’s “success” in Iraq as “an extraordinary achievement.”
The continuing murders in Pakistan and Afghanistan are so numerous and so regular that they barely merit notice for more than a few days, at least as far as the United States government and most Americans are concerned. Over the recent Thanksgiving weekend, the United States government murdered at least 25 Pakistanis. (NATO and the U.S. government are indistinguishable in any matter of importance, in any matter of murders of this kind.) Pakistan is deeply angry and unhappy. The United States government and Obama are concerned only to the extent that Pakistan’s unhappiness might interfere with the U.S.’s intention to dominate and control that part of the world. The U.S. government and Obama aren’t particularly upset about the murders, but about the strategic problem that might result from the murders.
On the same weekend: “Six children were among seven civilians killed in a NATO airstrike in southern Afghanistan, Afghan officials said Thursday.” The story has already fallen into the well of forgetfulness. It must be the case that incidents like this occur at least once a day given the number of military operations ordered by the Murderer-in-Chief and carried out by those who follow his orders. Perhaps only one innocent person is killed. “Only” one. Perhaps we should ask “whoever’s left out there” what that one loss signifies.
Earlier in November, there was this story:


Last Friday, I met a boy, just before he was assassinated by the CIA. Tariq Aziz was 16, a quiet young man from North Waziristan, who, like most teenagers, enjoyed soccer. Seventy-two hours later, a Hellfire missile is believed to have killed him as he was travelling in a car to meet his aunt in Miran Shah, to take her home after her wedding. Killed with him was his 12-year-old cousin, Waheed Khan.
Over 2,300 people in Pakistan have been killed by such missiles carried by drone aircraft such as the Predator and the Reaper, and launched by remote control from Langley, Virginia. Tariq and Waheed brought the known total of children killed in this way to 175, according to statistics maintained by the organisation I work for, the Bureau of Investigative Journalism.
…
Unless the CIA can prove that Tariq Aziz posed an imminent threat (as the White House’s legal advice stipulates a targeted killing must in order for an attack to be carried out), or that he was a key planner in a war against the US or Pakistan, the killing of this 16 year old was murder, and any jury should convict the CIA accordingly.

These are only a few of the stories we know about, and only from a very brief period of time. Countless other murders take place all over the world, and we can only gather the dim outlines of what is occurring. This is not to mention numerous lesser acts of cruelty and violence, many of which will alter lives in searing ways, for all the desolate years to follow.
Consider:


Somewhere on this planet an American commando is carrying out a mission. Now, say that 70 times and you’re done… for the day. Without the knowledge of the American public, a secret force within the U.S. military is undertaking operations in a majority of the world’s countries.
…
Last year, Karen DeYoung and Greg Jaffe of the Washington Post reported that U.S. Special Operations forces were deployed in 75 countries, up from 60 at the end of the Bush presidency. By the end of this year, U.S. Special Operations Command [SOCOM] spokesman Colonel Tim Nye told me, that number will likely reach 120. “We do a lot of traveling — a lot more than Afghanistan or Iraq,” he said recently. This global presence — in about 60% of the world’s nations and far larger than previously acknowledged — provides striking new evidence of a rising clandestine Pentagon power elite waging a secret war in all corners of the world.
…
In 120 countries across the globe, troops from Special Operations Command carry out their secret war of high-profile assassinations, low-level targeted killings, capture/kidnap operations, kick-down-the-door night raids, joint operations with foreign forces, and training missions with indigenous partners as part of a shadowy conflict unknown to most Americans. Once “special” for being small, lean, outsider outfits, today they are special for their power, access, influence, and aura.

No minimally decent human being would choose to have anything whatsoever to do with a government which systematically engages in acts of this kind. This is true of anyone who is part of the national governing apparatus, or wishes to be. It is most especially true of anyone who wishes to become president. Even if a person declares his or her absolute commitment to ending all of this, it is impossible for one person to do it. The massive bureaucracy of death which carries out these acts was erected over decades; all such bureaucratic monstrosities take on lives of their own. It will not be dismantled by a single individual overnight, or even in a matter of months or probably years. That means the murders will go on.
It may be that at some point this machinery of death will be brought down comparatively quickly. If that happens, it will not be the result of one person’s actions, but of calamitous events on a momentous scale: widening war, catastrophic natural disasters, widespread financial collapse, and/or massive social unrest and violence. In the meantime, a reverence for life demands that we see the Death State exactly for what it is — and walk away to the fullest extent we can.
That is not the course Barack Obama chose. He wanted to be, he now is the Murderer-in-Chief. He is proud of his achievement.
Thus, the words I wrote over five years ago continue to hold a relevance and meaning that fill me with the deepest despair. I desperately wish that I had never had cause to compose this passage, and that I did not feel compelled to repeat it now:


If you have ever wondered how a serial murderer — a murderer who is sane and fully aware of the acts he has committed — can remain steadfastly convinced of his own moral superiority and show not even the slightest glimmer of remorse, you should not wonder any longer.
The United States government is such a murderer. It conducts its murders in full view of the entire world. It even boasts of them. Our government, and all our leading commentators, still maintain that the end justifies the means — and that even the slaughter of hundreds of thousands of innocents is of no moral consequence, provided a sufficient number of people can delude themselves into believing the final result is a “success.”
…
We can appeal all we want to “American exceptionalism,” but any “exceptionalism” that remains ours is that of a mass murderer without a soul, and without a conscience. … It is useless to appeal to any “American” sense of morality: we have none. It does not matter how immense the pile of corpses grows: we will not surrender or even question our delusion that we are right, and that nothing we do can be profoundly, unforgivably wrong.