US austerity: Genocide of 50 million people 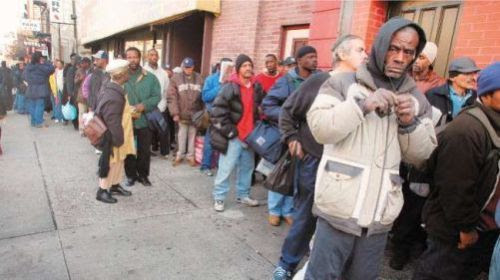 50 million Americans are in danger of losing their lives due to the government’s austerity measures.
No matter whether the next US president is named Obama or Romney, the Wall Street financier elite that dominates the United States is psychotically planning a series of tax increases for the middle class and working people, cuts in benefits and social services, and a transfer of wealth in favor of the top 1%, all of which will add up to a further cut of about 25% in the depleted US standard of living.
The mythical “fiscal cliff”
This outcome is being prepared right now by a demagogic propaganda campaign around the slogan that the United States faces a “fiscal cliff” at the end of the current calendar year. This alleged fiscal cliff is the result of two factors. First, the tax cuts enacted by George Bush the younger in the months before 9/11 are due to expire. If the Bush tax cuts are ended, the average family would pay a few hundred dollars more. But the tax rate for the richest earners would go from 35% to 39.6%, which, at high levels of income, can mean hundreds of thousands of dollars or more in taxes.
At the same time, stock speculators and hedge fund hyenas like Mitt Romney would no longer pay 15%, but rather 20%, on their profits. In other words, the Bush tax cuts were mainly a gift to the super-rich. The Republicans want to keep the Bush tax cuts for the rich, and if possible make people in the middle – earning between $48,000 and $80,000 per year – pay significantly more.
The other aspect of the fiscal cliff are the automatic cuts in military spending and social services spending which were built in to the budget agreement of August, 2011 (popularly known as the “Satan Sandwich”) which allowed the United States to avoid default on necessary payments. Under these automatic cuts, the Pentagon budget would be cut by about 8% or $500 billion over 10 years. At the same time, doctors and hospitals working for Medicare, the government’s health insurance program for people over 65, will suffer a 2% payment cut across the board. The goal of all this is to reduce federal spending by $1.2 trillion over the next 10 years. Obama and the Congress both ignore that austerity cuts of this type have actually increased the budget deficit in Greece and other European countries where they have been tried.
The lame duck session and the grand bargain
The goal of reactionary Republicans and of Obama’s Wall Street Democrats is to negotiate a “Grand Bargain” of austerity and cuts sometime in the next few months. One possible time for this dirty deal to be made will come in December, after the US general election at the beginning of November. In December, significant numbers of defeated or retiring congressmen and senators will be leaving, and many will be looking for jobs on Wall Street. They will be eager to betray the economic interests of the American people to curry favor with the bankers they hope will hire them. Otherwise, pressure will build for a Grand Bargain during the early months of 2013.
Such a Grand Bargain of austerity will target in particular Social Security (government old-age pensions), Medicare (health care for seniors), and Medicaid (health care for the poor); only token sacrifices will be asked from the rich 1%. If this scenario actually occurs, the lives of up to 50 million Americans will be in grave danger.
This is first of all the case because of the long decline in the American standard of living, which has, according to some reckonings, been reduced by about two thirds since August 15, 1971, when Nixon and Kissinger abandoned the Bretton Woods international monetary system. There is no more margin for cuts without tragic consequences. During this same period, the social mobility in the United States – understood as the ability to go from being poor to being well-off – has declined markedly, and is now inferior to every country in Western Europe except for ossified Great Britain.
50 million Americans officially in dire poverty

Every 10 years, the United States government conducts a census of the population, and in the process collects important data about demographics and income. It is now expected that the official US poverty rate, which underestimates the real problem of poverty, will rise to almost 16% of the population. Poverty means an individual living on less than $11,170, or a family of three living on less than $19,090. This is truly dire poverty. By this estimate, about 50 million Americans will be poor, the highest rate since Medicare and Medicaid were enacted in 1965.

According to official statistics, the US unemployment rate rose slightly to 8.3% in July 2012. Once again, this figure understates the problem. The US Department of Labor publishes a data series called the U6 unemployment rate, which tries to reflect underemployment — as in cases where a worker who wants to work full-time is forced to work part-time – and workers who have given up their job searches in despair.
By this measure, the US unemployment rate has been as high as 17.1% at the end of 2009, and is currently at 15%. These are depression levels. Assuming that the US workforce is about 155 million, this means that over 23 million Americans are actually out of work. If we add in elderly dependents and children, we will once again get close to the 50 million whose lives are now in danger.
Under Franklin D. Roosevelt’s original Social Security Act of 1935, the federal government could have provided benefits to one important category – impoverished mothers with dependent children. This was called welfare, but it no longer exists, having been abolished by Bill Clinton in 1995-96 as part of his reelection campaign. Currently it is estimated that about 15 million children – about 21% of all children in the United States – live below the official poverty line. Since an adequate standard of living requires about twice the federal poverty level income, it follows that 44% of US children are in reality stuck in low income families. They can thank Bill Clinton for their current situation.
That same Social Security Act of 1935 established a system of unemployment insurance, which is now being sorely tested. When the depression began in 2008-9, the Obama stimulus bill extended jobless payments to unemployed workers for 99 weeks in many states. Now, with the depression grinding on, more than 5 million people have been unemployed for more than six months, and most of these have joined the ranks of the 99ers – those who have been jobless for almost 2 years. Some 23 states, especially those governed by Republicans, have now cut eligibility by as much as five months, impacting a half million unemployed. Only three states still offer 99 weeks of benefits, and that will end in September 2012.
Food stamps for 46.5 million under attack

The one federal program that still contributes to keeping the endangered 50 million alive is the Food Stamp program of the US Department of Agriculture, which currently feeds 46.5 million Americans. In some cities, the food stamp allowance is about $130 per month, which translates into about $1.55 per person per meal. This is already too little to permit good nutrition.

Right now the debate in the Congress is whether this program should be cut by $16 billion as the Republicans demand, or by “only” $5 billion, the Democratic Party proposal. Once again, any cuts in the food stamp budget under the current conditions will inevitably lead to vitamin deficiencies, cognitive impairment, and large increases in morbidity and mortality.
As for health insurance, most sources estimate that about 46 million Americans have no way of paying for the services of a doctor, hospital, or pharmacy. This figure largely overlaps with the 50 million who are in dire poverty, and the 50 million who are living on food stamps. Any reduction in Medicaid, which is intended for low income people, will take a toll of lives. Republicans are demanding massive cuts to Medicaid, while Democrats argue that moderate cuts will be sufficient. In reality, any cuts at all will represent thinly disguised murder.
Neither Obama nor Romney has anything to offer the endangered 50 million. Indeed, Romney has already announced that he is “not worried about the poor.” This issue highlights the inhuman cruelty of the political process in the United States today. How long before a social explosion forces the ruling elite to confront these issues?
WT/MA

Born in Pittsfield, Massachusetts, 1946, Dr. Webster Griffin Tarpley is a philosopher of history who seeks to provide the programs and strategies needed to overcome the current world crisis. As an activist historian he first became widely known for his book George Bush: The Unauthorized Biography (1992), a masterpiece of research which is still a must read. AB Princeton 1966, summa cum laude and Phi Beta Kappa; Fulbright Scholar at University of Turin, Italy; MA in humanities from Skidmore College; and Ph.D. in early modern history from the Catholic University of America with emphasis on the role of Venice in the origins of the Thirty Years’ War (1618-1648). During 2008, he warned of the dangers of an Obama presidency controlled by Wall Street with Obama: The Postmodern Coup, The Making of a Manchurian Candidate and Barack H. Obama: The Unauthorized Biography. His interest in economics is reflected in Surviving the Cataclysm: Your Guide Through the Worst Financial Crisis in Human History Against Oligarchy. His books have appeared in Japanese, German, Italian, French, and Spanish.
Posted by Deb Simon at Saturday, August 11, 2012