Al Qaeda militants funded, armed and arrayed against Syria by the West since at least 2007 receive PR boost from Western media as public awareness grows of their presence.
by Tony Cartalucci

August 11, 2012 - "To undermine Iran, which is predominantly Shiite, the Bush Administration has decided, in effect, to reconfigure its priorities in the Middle East. In Lebanon, the Administration has coöperated with Saudi Arabia’s government, which is Sunni, in clandestine operations that are intended to weaken Hezbollah, the Shiite organization that is backed by Iran. The U.S. has also taken part in clandestine operations aimed at Iran and its ally Syria. A by-product of these activities has been the bolstering of Sunni extremist groups that espouse a militant vision of Islam and are hostile to America and sympathetic to Al Qaeda." -The Redirection, Seymour Hersh March 5, 2007

"In the nineteen-eighties and the early nineties, the Saudi government offered to subsidize the covert American C.I.A. proxy war against the Soviet Union in Afghanistan. Hundreds of young Saudis were sent into the border areas of Pakistan, where they set up religious schools, training bases, and recruiting facilities. Then, as now, many of the operatives who were paid with Saudi money were Salafis. Among them, of course, were Osama bin Laden and his associates, who founded Al Qaeda, in 1988.

This time, the U.S. government consultant told me, Bandar [bin Sultan] and other Saudis have assured the White House that “they will keep a very close eye on the religious fundamentalists. Their message to us was ‘We’ve created this movement, and we can control it.’ It’s not that we don’t want the Salafis to throw bombs; it’s who they throw them at—Hezbollah, Moqtada al-Sadr, Iran, and at the Syrians, if they continue to work with Hezbollah and Iran.” -The Redirection, Seymour HershMarch 5, 2007 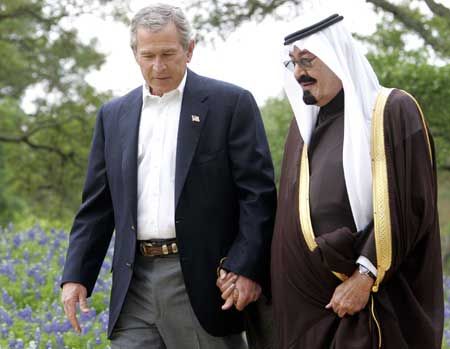 Image:  Former-US President George Bush and King for Life of Saudi Arabia, Abdullah bin Abdulaziz al Saud: "The loving parents of Al Qaeda." From the 1980's to present day, the US and Saudi Arabia have funded, armed, and directed Al Qaeda while performing propaganda campaigns to bend public perception regarding the terrorist organization - portraying them as heroes, then villains, and back again. The "War on Terror" is a fraud.
....
Quite clearly, since 2007, the US and its allies were knowingly arraying sectarian extremists with direct ties to Al Qaeda against Lebanon, Syria, and Iran. Likewise in 2011, the US while leading NATO operations in Libya, armed, trained, funded, and provided air support for Libya Islamic Fighting Group (LIFG) militants - also with direct ties to Al Qaeda.

Al Qaeda, by all accounts, is a joint US-Saudi creation, led by a Saudi (Osama bin Laden), and armed and funded by Western arms and cash laundered through Saudi Arabia to maintain both "plausible deniability" for the US, and to maintain a semblance of credibility for Al Qaeda militants across the Muslim World.

The now feigned, preposterous "fears" the US is expressing as the monster they've created becomes known to global public opinion, constitutes a new depth of depravity in regards to Western foreign policy, ultimately and irrevocably undermining the legitimacy of the West's collective institutions and its status as a "stabilizing force" in global geopolitics.

The Associated Press joins Western governments in resigning its legitimacy and credibility with their recent report titled, "U.S. fears extremists could highjack goals of anti-Assad rebels," which claims:


Al-Qaida has advanced beyond isolated pockets of activity in Syria and now is building a network of well-organized cells, according to U.S. intelligence officials, who fear that the terrorists could be establishing a foothold that would be hard to defeat if rebels eventually oust President Bashar Assad.


At least a couple hundred al-Qaida-linked militants already are operating in Syria, and their ranks are growing as foreign fighters stream into the country daily, current and former U.S. intelligence officials say. The units are spreading from city to city, with veterans of the Iraq insurgency employing their expertise in bomb-building to carry out more than two dozen attacks so far. Others are using their experience in coordinating small units of fighters in Afghanistan to win new followers.

While AP attempts to claim this is a disturbing trend that "US officials" are worried about, other representatives of the corporate-financier interests driving Western foreign policy are attempting to repackage Al Qaeda as "necessary" and shifting to a benign ally. 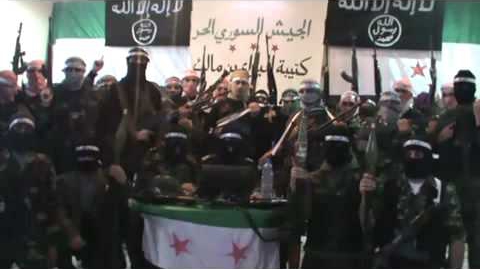 Image: As more photos depicting Syria's so-called "Free Syrian Army" as fighting under the banner of Al Qaeda emerge, hiding Al Qaeda's presence becomes more difficult for the Western press and the corporate-financier interests they represent. Therefore a simultaneous campaign is being waged to spin Al Qaeda's presence as "recent" and "unexpected," while attempts are made to repackage the militant group as "heroes."

....
Recently, the Council on Foreign Relations, a premier Fortune 500-funded US think-tank, wrote in their article, "Al-Qaeda's Specter in Syria," that:

"The Syrian rebels would be immeasurably weaker today without al-Qaeda in their ranks. By and large, Free Syrian Army (FSA) battalions are tired, divided, chaotic, and ineffective. Feeling abandoned by the West, rebel forces are increasingly demoralized as they square off with the Assad regime's superior weaponry and professional army. Al-Qaeda fighters, however, may help improve morale. The influx of jihadis brings discipline, religious fervor, battle experience from Iraq, funding from Sunni sympathizers in the Gulf, and most importantly, deadly results. In short, the FSA needs al-Qaeda now."

Also, while AP attempts to portray this disturbing trend as recent, Reuters had reported in their article, "Outgunned Syria rebels make shift to bombs" that months ago that militants operating in Syria had already begun deploying terrorist bombings utilizing skills honed by extremist militants who fought in Iraq over the last decade.

The Telegraph reported even earlier, in November 2011, that Al Qaeda's LIFG commander Abdul Hakim Belhaj had personally visited the Turkish-Syrian border to pledge cash, weapons, and fighters toward efforts in subverting Syria. Also in late 2011, reports that Libyan fighters, at least 600 of them, had already made their way to Syria began surfacing. As early as April 2011, the role of Al Qaeda in violence playing out all across the US-engineered "Arab Spring" was covered in Dr. Webster Tarpley's "Al Qaeda: Pawns of CIA Insurrection from Libya to Yemen," where Syria was specifically mentioned as targeted by the West's supra-regional campaign.

If the alternative media knew in 2011 that Al Qaeda was on the ground in both Libya and Syria (and elsewhere), and if the New Yorker already reported, point for point exactly who and how events would play out in Syria, as far back as 2007, how is it then that the US only now "fears" extremists of their own creation "hijacking" the goals of the so-called opposition?

Like Weapons of Mass Destruction, Strict Conventions Must Be Arrayed Against "Proxy Wars."

Sarin nerve gas, anthrax, and nuclear weapons are considered weapons of such indiscriminate mass destruction, that their use is not only prohibited by both national and international laws and conventions around the world, but have entered civilization's collective conscience as untenable and inexcusable to use on the battlefield.

Image: Nuclear, biological, and chemical weapons are considered weapons of mass destruction, and because of their indiscriminate nature, are banned by both national and international conventions. Proxy terrorists and mercenaries deployed into foreign countries (such as Libyans deploying to fight in Syria with US-Saudi backing) are not only indiscriminate, creating mass destruction and carrying out egregious atrocities, but do so for months, even years. Likewise their use should be banned by national/international conventions and nations caught employing them should have sanctions, severe penalties, and at the very least international condemnation leveled against them.

....
And just as Sarin nerve gas indiscriminately causes vast swaths of death, or a nuclear weapon kills all within its effective radius, so too do roving proxy armies, fanatically indoctrinated, monetarily motivated, armed, and funded by foreign interests, indiscriminately killing any and all that oppose them. While the West has used the possession and potential use of "weapons of mass destruction" as an excuse to violate the sovereignty of independent nation-states, it itself is deploying indiscriminate tactics leaving tens of thousands dead in nations like Libya, Somalia, Yemen, Sudan, Mali, and Syria.

If deploying weapons of mass destruction against a population is considered a grievous war crime because of the indiscriminate, unsparing effects of such implements, then surely deploying armed proxies consisting of fanatical killers is likewise a grievous war crime - perhaps more so because of the extended sustainability of such operations, and the capacity to keep on killing and terrorizing for months, even years.

And while we will continue to protest the machinations of the West, we must identify, boycott and replace the very corporate-financier interests underwriting this abhorrent agenda. The process of protesting is moot if it is not done in tandem with an appropriate application of real, tangible activism. To protest Western policy, but then patronize the very corporate-financier interests driving it, is self-defeating and ultimately futile.
Posted by Deb Simon at Saturday, August 11, 2012