Cleaning Up Obama's "Dark Side" 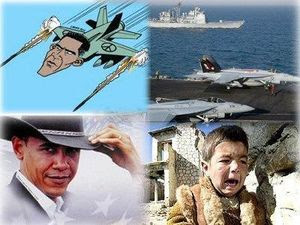 © Unknown
Obama's handlers, with the able assistance of the New York Times, paint a presidential portrait that "reconciles the old, imagined Obama with Dick Cheney's 'dark side.'" The president routinely violates international law and subverts the U.S. Constitution but, we are told, he does so with a keen sense of moral obligation. His millions of victims should be pleased.

"The Times report is yet another attempt to compartmentalize the escalating aggression against civilized norms of international behavior by the U.S. and its allies."

It took two teams to script the 6,000-word psycho-drama headlined Secret 'Kill List' Proves a Test of Obama's Principles and Will, in the May 29 New York Times. Reporters Jo Becker and Scott Shane got the byline, but the real content - the intended message - was provided by "three dozen current and former advisors" to the president whose 'insights' shaped the production. This symbiosis of State content-provider and corporate media packager passes for probing journalism in the United States. The public is left with the impression (in the advertising sense of the word) of a president who deploys armadas of drones - but with a conscience - a man of "deep reserve" who "approves lethal action without hand-wringing," yet is determined "to align the fight against Al Qaeda with American values." In case the god-fearing are not convinced that Barack Hussein Obama is a sufficiently Christian soldier, the president's counterterrorism advisor, John Brennan, a 25-year veteran of the CIA, acts as a "priest whose blessing has become indispensable to Mr. Obama."

This collaboration between the State and its scribes is the equivalent of Great Leader portraiture from back-in-the-day: the careful construction of the approved personality behind the power. However, a modern imperial leader, especially one engaged in the business of enslaving an unwilling world - and, even more especially, a Black head of state in an historically White Man's Country - must commission periodic retouches of his portrait. There is no better toucher-upper than the New York Times, and no more disciplined portrait-sitter than Obama.

"The public is left with the impression (in the advertising sense of the word) of a president who deploys armadas of drones - but with a conscience."

Although the Times article pretends to examine the three-year history of Obama's global military offensive and his regime's savaging of domestic and international law - which is impossible without using words like "imperialism," "war crimes," and other terminology that is verboten in the paper - its real purpose is to rationalize such behavior, while at the same time transferring the inherent motives of empire to the inner workings and conflicts of one man: the president.

He's one helluva guy, "taking on the role, without precedent in presidential history, of personally overseeing the shadow war with Al Qaeda." Actually, the al Qaida pretext for Washington's assault on the fundamental precepts of the rule of law, domestically and globally, was worn out and semi-abandoned under George Bush, who had no problem with expanding empire in-the-raw, without need for bin Laden as co-star in the drama. The Times report is yet another attempt to compartmentalize the escalating aggression against civilized norms of international behavior by the U.S. and its allies - even after the passing of the predicate perpetrator, Osama bin Laden, and most of his men.

"Obama is just as capable of carrying out instant executions as Cheney ever was."

From the perspective of Obama's handlers, the piece reconciles the old, imagined Obama with Dick Cheney's "dark side," thus forming a composite leadership template of the president as an "all-American" statesman. Obama is just as capable of carrying out instant executions as Cheney ever was - the decision to take out American citizen Anwar al-Awlaki was "an easy one" - but he keeps a "priest" nearby to be sure he's on the side of the angels. Cheney with a halo - singing Al Green.

In a sense, the Times-assisted makeover of Obama provides a ten-year update on his speech of October 2, 2002: "I am not opposed to all wars. I'm opposed to dumb wars." It took his wishful anti-war supporters more than a decade to figure out this was just another way of saying, "I'll be the smartest, most prolific, charming war monger in U.S. history. Watch me."

Today's Obama, as packaged by the Times, is not opposed to wholesale drone murder from the skies, routine trampling of international law, and evisceration of the U.S. Bill of Rights. Rather, he has "reserved to himself the final moral calculation." The difference between his "dark side" and Cheney's, presumably, is that Obama engages in deeper moral introspection before turning out the lights.

We thank reporters Becker and Shane for that clarification. 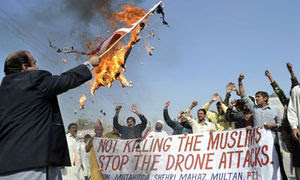 © SS Mirza/AFP/Getty
A Pakistani protest against US drone strikes. The latest two attacks have killed 12 people.
Ten more people have been killed by a US drone strike against suspected militants in Pakistan, with the aircraft firing its missiles into a mourning gathering for one of two fighters killed in a similar attack the previous day.

Two Pakistani intelligence officials say four missiles were fired at the village of Mana Raghzai in South Waziristan near the border with Afghanistan on Sunday morning.

At the time of the attack, suspected militants were gathered to offer condolences to the brother of a militant commander killed during another American unmanned drone attack on Saturday. The brother was one of those who died in the Sunday morning attack. The Pakistani officials said two of the dead were foreigners and the rest were Pakistani.

It brought to 12 the total number of people killed in two days and was the sixth American drone strike over the last two weeks. The US government considers the drone campaign a vital tool in the war against al-Qaida and the Taliban.

The American drone campaign has been a source of deep frustration and tension between the US and Pakistan. Under Barack Obama the US has stepped up its drone campaign in the Pakistani border areas as a way to combat insurgents and terrorists who use Pakistan as a base for attacks against American and Nato forces in Afghanistan. The number of drone attacks has eased in recent years.

Secretly, many Pakistani military commanders are believed to support the drone campaign. But among the Pakistani public, where the US is viewed with mistrust, the strikes are considered an affront to their sovereignty.

The attacks are complicating efforts for the US and Pakistan to come to an agreement over reopening the supply routes to Nato and American forces in Afghanistan. American air strikes inadvertently killed 24 Pakistani soldiers in November, prompting Islamabad to block US and Nato supply lines into Afghanistan. Pakistan wants an apology and an end to drone strikes before it reopens them.
Posted by Deb Simon at Sunday, June 03, 2012