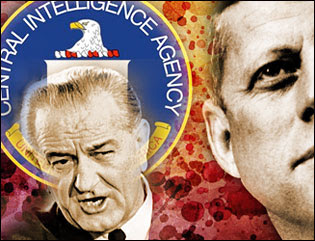 "But that’s the point: once something is repeated enough by government officials, we become numb to its extremism. Even in the immediate wake of 9/11 — when national fear and hysteria were intense — things like the Patriot Act, military commissions, and indefinite detention were viewed as radical departures from American political tradition; now, they just endure and are constantly renewed without notice, because they’ve just become normalized fixtures of American political life. Here we have the Obama administration asserting what I genuinely believe, without hyperbole, is the most extremist government interpretation of the Bill of Rights I’ve heard in my lifetime — that the Fifth Amendment’s guarantee that the State cannot deprive you of your life without “due process of law” is fulfilled by completely secret, oversight-free “internal deliberations by the executive branch” — and it’s now barely something anyone (including me) even notices when The New York Times reports it (as the ACLU’s Jameel Jaffer asked yesterday: “These Dems who think executive process is due process: Where were they when Bush‬ needed help with warrantless wiretapping?” — or his indefinite detention scheme?)" - Glenn Greenwald, "How extremism is normalized," May 30, 2012.

Since the parental figures at the Washington Post and New York Times are now reporting on the Obama administration's admission that it has the power to secretly kill human beings without due process the little children in la la land can all admit this is real. But they still pretend that the conspiracy theorists are wrong and paranoid about all the other realities and facts they talk about.

We're still "kooks" and "nut jobs" for saying that radical elements within the CIA and Mossad killed Americans on 9/11, and that JFK, MLK, and RFK were all assassinated by the CIA.

These are not conspiracy theories. These are truths that can't be erased from history and human memory.

As of 2012, JFK, MLK, and RFK remain the biggest victims of the CIA's secret kill list policy, not Osama Bin Laden and Anwar al-Awlaki, both of whom were CIA double agents.

To believe the sick and medieval policy of secretly killing innocent people and political figures began with the Obama administration is poppycock. The CIA has been practicing this policy from deep inside the Killing Temples of Babylon in Washington for decades.

The CIA has killed more Americans than Al-Qaeda. The CIA is so evil that it gave birth to Al-Qaeda to kill Americans under the guise of being Arabs and Muslims. The killers in the CIA thirst for American blood so much that they invent foreign enemies to attack America and kill Americans. The CIA stands for Cannibals In America.

But were still the "kooks" for simply for telling the truth. Why? Well, because the New York Times and Washington Post say we're kooks, and the little children believe it. Why? Because reality ends at the bottom of the pages of the New York Times and Washington Post. Anything that's not covered in those pages is not "reality." It belongs in the dirty, irrational, mucky swamps of "conspiracy theory," where rational, level-headed, and respectable citizens go to dig their social graves.

But, at least there has been some progression towards public recognition of the truth. Now, people can say without fear that the White House and CIA are led by barbaric executioners who have a secret kill list policy and use theSpanish Inquisition as their model for governance.

The CIA's biggest secret is that it is a cancer on America and the planet. It has used up the wealth of the American people to finance illegal wars around the world that benefit the very few who hate America and want to destroy it.

Forget the propaganda. The CIA does not protect American interests, but the interests of the international banking cartel that hijacked America in 1913 and rules America to this day. The CIA committed the biggest act of treason against America on November 22, 1963, and the biggest act of terrorism against America on September 11, 2001, with great help from Israel's Mossad.

It should be clear to all that the CIA is a traitorous and terrorist organization. There are reports from Syria that CIA death squads were responsible for the Houla massacre. The CIA is engaging in the mass murder of innocents, including women and children, on a scale that would make third world dictators blush.

The CIA's directors should be hanged, and its apologists should be shamed. The world has moved beyond little political reforms. No sane and moral individual can defend the CIA. The CIA deserves to be destroyed because it has created a second dark age in Western civilization. It has brought upon the people of the world a third world war, with Israel's Mossad and Britain's MI6 at its side.

If we want to end the war on terror, the CIA must be abolished.

If we want to end the Second Dark Ages, the CIA must be abolished.

If we want to end the threat of terrorism, the CIA must be abolished.

If we want to end the war on human consciousness, the CIA must be abolished.

If we want to end the secret assassination of American citizens and the citizens of other nations, the CIA must be abolished.

And the Mossad, MI6, and every other state terrorist organization must be abolished as well.

These secret state institutions are evil to the core. Their victims can be counted in the millions.

Anyone who defends the existence of these evil institutions and uses their false rationale to justify their position is dishonest and immoral. They want to keep humanity in the CIA Dark Ages.

Related:
The CIA's Inquisition: How Terrorism And Conspiracy Theory Became The New Blasphemy And Heresy
The CIA's History of Assassinations of American Citizens
The CIA's War On Human Consciousness
Posted by Deb Simon at Wednesday, May 30, 2012