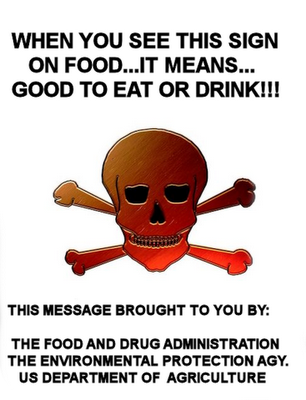 PF Louis
Natural News
Sept 3, 2012
Just in case you’ve forgotten, EPA stands for Environmental Protection Agency. That was sarcasm. You haven’t forgotten. But it appears the EPA has.
Reading alphabet soup can be confusing. The FDA, USDA and EPA all seem to cross over each other when it comes to what happens with food.
Recently, the EPA made a ruling on the use of a chemical that’s used for a variety of products, including sanitizing cleaners for facilities of food industry providers and restaurants. The chemical will show up in processed foods.
Government safety agencies safeguard industry profits, not health and safety
An August 22, 2012 Courthouse News edition contained a short article entitled “More Ammonia Now Allowed in Processed Food.” It was a reference to the EPA’s latest revision for limits using Didecyl Dimethyl Ammonium in the carbonate or bicarbonate form (DDACB). Focus on ammonia.
The former limit of 240 ppm (parts per million) was raised to 400 ppm. A petition to raise the allowed limit was issued to the EPA by a principle provider of the chemical, Lonza, according to the Courthouse News press release.
The reason for limiting DDACB is residual amounts of highly toxic ammonia used in food facilities are carried by the foods and consumed.
According to the EPA’s own document on the ruling, those industries affected (favorably) by the increased DDACB toxicity allowance are: Dairy, food manufacturing, beverage manufacturing, and pesticide producers. (EPA, Source below)
Notice that one company submitted a petition and the EPA granted an approval. But hold on, when has an alphabet soup agency really responded to a mass petition on raw milk or GMOs? Never would be a close enough answer.
These agencies only respond to industry demands regardless of their health or safety risks.
Adding more toxicity and GMOs into the food chain are not given a second thought by the government’s “protective” agencies. The revolving door between government and industry spins quickly with highly paid industry lobbyists the only ones getting access to easily corrupted politicians.
On rare occasions, huge petitions, email, call-in, or mail-in campaigns will thwart threatening legislation. But those hard won victorious battles serve as retreats for key legislators to come back with slightly different wording or sneak industry sponsored rulings into newly proposed or existing legislation later.
Meanwhile, petitions to federal administration agencies for labeling GMOs are ignored, and a petition to allow raw milk federally was responded with boiler plate official nonsense. (http://www.naturalnews.com/034718_raw_milk_petition_White_House.html)
The list of dangerous drugs, pesticides, chemical additives, and GMOs that are rubber stamped for approval by the FDA, EPA, and USDA without any precautionary wait periods is staggering. Ammonia (ammonia hydroxide) was also a toxic feature of “pink slime” used by the meat packing industry as a “hamburger helper.”
The ammonia compound was use to sanitize meat scraps from the floors of meat packing sites, then ground up with the rest of the beef and sold as hamburger meat. (http://www.naturalnews.com)
Whistle blowers revealed this and somehow got the attention of the mainstream media enough to cause massive public awareness of pink slime in ground beef. The result was the major food distributor Cargill suffered a tremendous drop in its sales of ground beef and apparently began phasing out pink slime.
The last bastion for us peasants to fend off the oligarchy money interests’ slow kill with food and medicine may be mass boycotts. But enough have to know what should be boycotted and realize they don’t need it.
Sources for this article include:
http://www.courthousenews.com/2012/08/27/49686.htm
http://www.gpo.gov/fdsys/pkg/FR-2012-08-22/html/2012-20663.htm
http://www.naturalnews.com/031018_food_safety_hypocrisy.html
Posted by Deb Simon at Monday, September 03, 2012