Newsflash: Bin Laden Was Not In The Bin Laden Raid 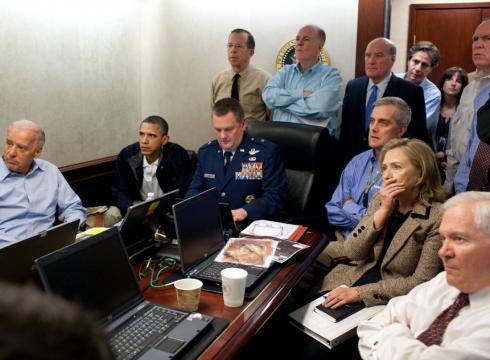 Photo: A group of professional actors watching an early preview of Kathryn Bigelow’s much-anticipated film about the mysterious Bin Laden raid called, “Zero Dark Thirty.”
The discussion about the mysterious Bin Laden raid on the night of May 1st, 2011, has been focused around government leaks and minor plot revelations, but has avoided the larger issue at the center of the drama, which is that Osama Bin Laden was not in the raid.
Again: Bin Laden was not in the Bin Laden raid.
Where was he?
He was busy being dead.
Bin Laden wasn’t acting dead to avoid U.S. suspicion, he was dead for real, like ‘Weekend at Bernie’s’.
Remember what “being dead” meant? Remember what “for real” meant? It means that when a person is dead, he is dead for real and gone to the next chapter of his spiritual existence. A dead person cannot be resurrected for political purposes by the earthly gods of the dead.
Bin Laden is not Jesus of Nazareth.
I know some people within the U.S. and Israeli intelligence communities still want to portray Bin Laden as the Arab Che to justify their illegal war on terror, but let’s be real, he was not a revolutionary or Messiah figure. He was a two-bit punk whose anti-American rebel army consisted mainly of CIA rejects and gullible dupes.
Since the “Bin Laden raid,” the White House has tried to turn Abbottabad, Pakistan into Bin Laden’s Graceland, but their grand hoax has not stood the test of time.
There is a movie due out in December by Kathryn Bigelow called ‘Zero Dark Thirty,’ and a new book by a Navy SEALs officer, both of which seek to unwrap a mystery that never happened.
It is really charming if you think about it. Grown-up adults (if you can call them that) are arguing about a mythical event and taking the debate so seriously that they are fighting about leaks and counter-leaks.
Take a step back, and laugh at this collective insanity.
No proof of Bin Laden’s body has emerged in more than fifteen months since the raid. And his burial at sea didn’t take place. Where does that leave us? Are we supposed to wait for the tide of time to recover fragments of Bin Laden’s limbs to the shore of our consciousness? What are we, children?
Bin Laden lived and died in the land of myth. That is the truth.
“He has been dead, was dead, and is dead. There has never been any evidence of his body, a video, forensic evidence, or autopsy,” said former State Department official and psyop master Steve Pieczenik on the Alex Jones show on Friday, August 24, 2012.
Dr. Pieczenik, referring to the explosive comments he made in May 2011, again on the Alex Jones show, when he told the American people that Bin Laden died of Marfan syndrome in late 2001, added on Friday:

The Bin Laden saga belongs on the screen, since the telling of his life and death is best done with the arts of fiction.
One should watch the film ‘Zero Dark Thirty’ not with the mentality of a child but of a seasoned mental warrior who has lived through and survived the psy-op war against global public consciousness by the United States government.
Walk into the theater with more than just a skeptical mind. Walk into the theater knowing that the entire story about the Bin Laden raid is fake.
Posted by Deb Simon at Tuesday, August 28, 2012