Kangaroo escapes with help of fox and boar 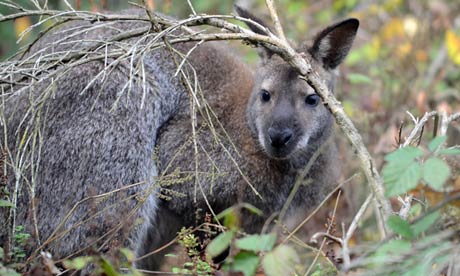 Kangaroo escapes in Germany are not unprecedented. This Bennett's tree-kangaroo escaped from a breeder in October last year. Photograph: Andreas Schmidt/EPA
A kangaroo is on the run in Germany after breaking out of a wildlife park, with a fox and a wild boar as his suspected accomplices.
Michael Hoffmann, assistant head of the Hochwildschutzpark Hunsrück west of Frankfurt, said on Monday the male kangaroo was one of three that escaped overnight on Saturday with the inadvertent help of the menagerie that lives in the local woods.
Hoffmann said the kangaroos got out of their enclosure after a young fox snuck into the park and dug a hole next to the cage's fencing. Two of the three were then able to escape the park entirely through another hole dug by a wild boar under the exterior fence.
"We've got two of them back; now we're just looking for the third."
Posted by Deb Simon at Monday, August 27, 2012