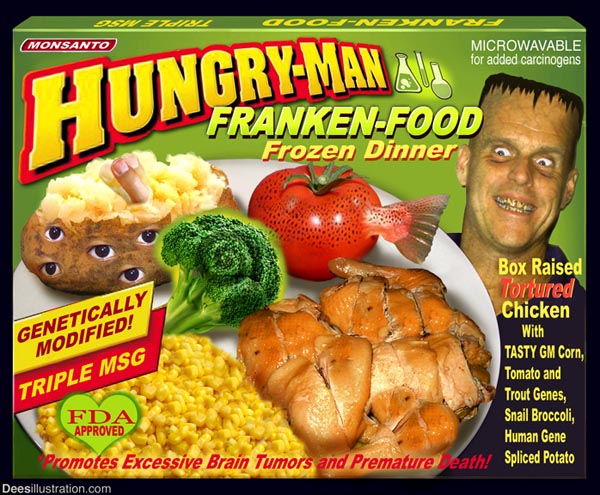 Monsanto, Dow, and the like use part of their big profits to ensure minimal public oversight of their products.
By Tom Philpott | Mon Aug. 6, 2012 3:00 AM PDT
The so-called "Big Six" agrichemical companies—Monsanto, Syngenta, Dow Agrosciences, BASF, Bayer, and Pioneer (DuPont)—are sitting pretty. Together, they control nearly 70 percent of the global pesticide market [1], and essentially the entire market for genetically modified seeds. Prices of the crops they focus on—corn, soy, cotton, etc.—are soaring, pushed up by severe drought in key growing regions. Higher crop prices  typically translate to increased pesticide sales as farmers have more money to spend on agrichemicals and more incentive to maximize yield.
The companies operate globally—and have gained a stronghold in that emerging center of industrial agriculture, Brazil [2]—but the biotech-friendly US is their profit center. They've got a big chunk of US agriculture pretty well sewn up—their GMO seeds dominate our corn, soy and cotton crops, which account for more than 53 percent of US farmland [3], and have won approval for GMO alfalfa (hay), which accounts for another 19 percent. The vast annual US corn crop—which accounts for 40 percent of the globe's corn most years—is a particular bonanza, not just for GMO seeds but also a stunning amount of insecticides, fungicides, [4] and herbicides [5].
But two things could mess up the Big 6 here in the US: 1) any delay in the regulatory process for a new generation of seeds engineered for resistance to multiple herbicides; and 2) any major move to require labeling of foods containing GMOs, a requirement already in play in many other countries [6]—including the European Union, China, Japan, and South Korea—and one for which the US public has expressed overwhelming support. [7] Unsurprisingly, the Big 6 are investing millions of their vast profits into forestalling both of those menaces.
Speedy deregulation of the new-generation herbicide-tolerant crops is important for a simple reason: Monsanto's blockbuster Roundup Ready technology—featuring corn, soy, cotton, sugar beet, and alfalfa (hay) seeds engineered to resist Monsanto's Roundup herbicide—is failing. Roundup-resistant superweeds are galloping out of control [8] throughout big-farm country. The industry's only solution to the problem is to roll out seeds resistant to multiple herbicides at once, adding old, toxic ones like 2,4-D and dicamba to the Roundup mix. (Roundup itself, now the most widely used herbicide in the US by a wide margin, has long enjoyed a reputation as mostly harmless chemical, but that status has been quietly crumbling [9] in scientific circles.)
In a paper [10] released in January, a team of Penn State scientists assessed the biotech-industry's strategy, and its conclusion was stark:


First, crops with stacked herbicide resistance are likely to increase the severity of resistant weeds. Second, these crops will facilitate a significant increase in herbicide use, with potential negative consequences for environmental quality. Finally, the short-term fix provided by the new traits will encourage continued neglect of public research and extension in integrated weed management.

In other words, the strategy will work brilliantly to sell more herbicides and burnish the bottom lines of the Big 6, but it will only put off a reckoning with the problem of resistant weeds while simultaneously harming the environment. Approaches that would work—such as growing more crops than just corn and soy year after year and planting winter-season cover crops that would help suppress spring weeds—wouldn't make the Big 6 any money.
So Dow, Bayer, and Monsanto all have applications [11] into the USDA for novel crops resistant to multiple herbicides. While their approval is essentially a formality—I've written before about how the US regulatory system has no real mechanisms for seriously vetting the environmental impacts of GMO crops [12]—the current system takes takes time, sometimes years, to move crops through the application process to fields. And once the companies manage to push their crops through, the approvals remain vulnerable to lawsuits from environmental NGOs like Center for Food Safety.

One rider would allow farmers to plant seeds even if a federal court orders a stoppage.
To speed things up and eliminate the inconvenience of lawsuits, the agrichemical lobby has pushed House pols to sneak in industry-friendly  provisions to two recent House agriculture-related bills, as I reported here[13] and here [14]. One would streamline and limit the USDA's process for assessing new crops; another would allow farmers to plant seeds even if a federal court orders a stoppage pending more environmental rule. Sourcewatch researcher Jill Richardson has dug up the details [15] into just how much cash the Dow and Monsanto shoveled into the Hill to lobby on the (de)regulatory issue.
In the first quarter of 2012, Monsanto spent $1.49 million while Dow spent $370,000 hectoring Congress on the Plant Protection Act, which is the law under which the USDA regulates new GMOs. The American Farm Bureau Federation, long-time ally to the Big 6, added a total of $640,000 in lobbying that quarter at least some of which went to biotech regulation. In the second quarter, the cash continued flowing, with Monsanto dropping $1.6 million and Dow chipping in $220,000.
These particular efforts may end up being in vain; the two House bills in question are in limbo for reasons completely unrelated to the industry-friendly provisions the lobbyists rammed in. But there's no reason to expect that the Big 6 will stop using Congress as a whip with which to tame its putative watchdog, the USDA.
Tomorrow, I'll look at another front in the industry's war against regulation—the California ballot initiative on GMO labeling.
Source URL: http://www.motherjones.com/tom-philpott/2012/08/biotech-gmo-deregulation
Links:
[1] http://www.panna.org/issues/pesticides-profit/chemical-cartel
[2] http://www.gmwatch.org/latest-listing/1-news-items/14110
[3] http://www.ncga.com/uploads/useruploads/woc_2012_poster.pdf
[4] http://www.panna.org/blog/ge-corn-sick-honey-bees-whats-link
[5] http://www.responsibletechnology.org/posts/?p=2193
[6] http://www.foodsafetylabs.com/eng/services_1_5.html
[7] http://www.mellmangroup.com/index.php?option=com_content&amp;view=article&amp;id=531:majority-want-more-labels-on-food&amp;catid=40:commentary&amp;Itemid=96
[8] http://www.midwestproducer.com/news/crop/resistant-weeds-growing-in-strength-numbers/article_eb7e36c6-d67a-11e1-acae-001a4bcf887a.html
[9] http://www.motherjones.com/tom-philpott/2011/08/monsantos-roundup-herbicide-soil-damage
[10] http://www.jstor.org/discover/10.1525/bio.2012.62.1.12?uid=3739920&amp;uid=2&amp;uid=4&amp;uid=3739256&amp;sid=21101127629347
[11] http://www.aphis.usda.gov/biotechnology/not_reg.html
[12] http://www.motherjones.com/environment/2011/07/usda-deregulate-roundup-gmo-tom-philpott?page=2
[13] http://www.motherjones.com/tom-philpott/2012/07/gmo-industry-flexes-its-muscles-capitol-hill
[14] http://www.motherjones.com/tom-philpott/2012/07/house-ag-committee-takes-aim-food-stamps-gmo-regulation
[15] http://www.sourcewatch.org/index.php?title=Biotech_Riders_in_the_2012_Farm_Bill#Lobbying
Posted by Deb Simon at Monday, August 06, 2012