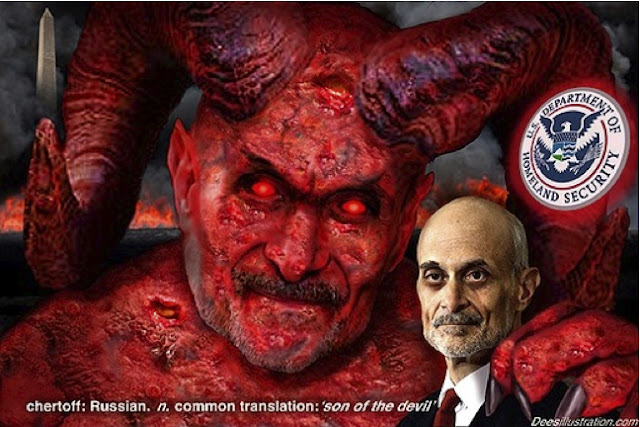 Tags:
Former Secretary of Homeland Security Michael Chertoff said Sunday the rise of incendiary political rhetoric in recent years threatens public safety.
Memo to Former Secretary of Homeland Security Michael Chertoff: it is NOT the alleged "... rise of incendiary political rhetoric in recent years..." which "threatens public safety"; it is an out of control US federal government, and its policies, which threaten public safety in this country.
Any rise in this alleged "incendiary political rhetoric" is a direct result of a war-weary (and war-broke) US population being fed up with policies which negatively affect them in every conceivable way.
These pre-emptive wars (pick a place; Afghanistan; Yemen; Pakistan; and soon Syria and Iraq); are both illegal, because war was never declared against them by Congress, and immoral, and do not appear to be abating, but escalating, toward a world war.
And unfortunately, Mr. Chertoff, a world war is all those in the bowels of power in DC can seem to conjure in terms getting out of the financial mess they have created.
The offshoring of jobs continues briskly, as people who could once comfortably pay their mortgage every month have been evicted by the banks, and are now sleeping - with their children - in rapidly burgeoning tent cities. And when kids have no permanent address,that makes it harder to register for school. Even though mandates exist to insure education of homeless children, when a school district is broke (as many of them now are), they may not be able to accommodate homeless children.
Billions go to Israel while the infrastructure at home collapses, and homeless Veterans sleep in our streets. Banks and large corporations get bailed out, and the heads of those institutions never see the inside of a jail cell for what they have done to the American people.
Thinking, rational people are upset by these issues, and it would be unreasonable to believe, for one second, that they wouldn't have some kind of negative observations on this out-of-control government run amok.
And one last thought, sir, regarding things that are "threatening public safety"; let's talk about how the scanners you pimp to Congress, and sell to airports, are, indeed, threatening public safety, LITERALLY.
Of course, you and your family will never have to go through the indignation of being treated as though you were a criminal, even though you were not, xrayed, and then groped by the TSA GropeNazis; it's only "other people" for whom that specific indignity has been put in place.
And some day, sir, in a sane United States of America, your company, and every company affiliated with these scanners will be sued out of existence because of the damage these machines cause to health.
Great things are expected of terahertz waves, the radiation that fills the slot in the electromagnetic spectrum between microwaves and the infrared. Terahertz waves pass through non-conducting materials such as clothes , paper, wood and brick and so cameras sensitive to them can peer inside envelopes, into living rooms and "frisk" people at distance. The way terahertz waves are absorbed and emitted can also be used to determine the chemical composition of a material. And even though they don't travel far inside the body, there is great hope that the waves can be used to spot tumours near the surface of the skin. With all that potential, it's no wonder that research on terahertz waves has exploded in the last ten years or so. But what of the health effects of terahertz waves? At first glance, it's easy to dismiss any notion that they can be damaging. Terahertz photons are not energetic enough to break chemical bonds or ionise atoms or molecules, the chief reasons why higher energy photons such as x-rays and UV rays are so bad for us. But could there be another mechanism at work? The evidence that terahertz radiation damages biological systems is mixed. "Some studies reported significant genetic damage while others, although similar, showed none," say Boian Alexandrov at the Center for Nonlinear Studies at Los Alamos National Laboratory in New Mexico and a few buddies. Now these guys think they know why. Alexandrov and co have created a model to investigate how THz fields interact with double-stranded DNA and what they've found is remarkable. They say that although the forces generated are tiny, resonant effects allow THz waves to unzip double-stranded DNA, creating bubbles in the double strand that could significantly interfere with processes such as gene expression and DNA replication. That's a jaw dropping conclusion. And it also explains why the evidence has been so hard to garner. Ordinary resonant effects are not powerful enough to do do this kind of damage but nonlinear resonances can. These nonlinear instabilities are much less likely to form which explains why the character of THz genotoxic effects are probabilistic rather than deterministic, say the team. This should set the cat among the pigeons. Of course, terahertz waves are a natural part of environment, just like visible and infrared light. But a new generation of cameras are set to appear that not only record terahertz waves but also bombard us with them. And if our exposure is set to increase, the question that urgently needs answering is what level of terahertz exposure is safe.
Posted by Deb Simon at Monday, July 23, 2012