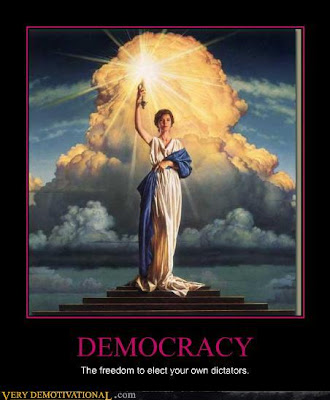 Debunking Skunks from My Bunker

Conspiracy theorists get no respect from skeptics -- strange, from self-avowed logicians who should know even broken clocks are right, once or twice a day.
Could it be that fact and objective reality has slipped so far in basic respect and understanding that innuendo and insinuation totally rule today's world?  After all, one person's conspiracy nut is another's leading -- although not yet lauded -- genius, fans of equivalencies and possibilities might say.
To some extent, it appears everyone's right.  Reality is getting much more difficult to sift and sort out, with so many surreal and previously unbelievable developments at all levels.
Award yourselves bonus points if you predicted a future in which any of the following happened:
And so on, of course.
So, fighting fire with fire, as we go up against global insanity, we have nowhere to go -- except for the refuge of unmitigated craziness -- in our search for the real truth.  Caution: Variable conjectures ahead.  Please use handrails and safety straps.
Because you're busy and have no time for a slow buildup of suspense, here's the cat, freshly turned out from the bag:  Aliens are not only among us, we're courting them for even more weapons -- not cures for diseases, or Whirled Peas, silly.
Is this wholly preposterous, mindless bull twaddle?  As Faux PseudoNews might say in defense of their talking-point-memo fictions all dressed up as real news,  "We babble -- you decide!"
So, as always, good luck to you on this plane of existence as you move about the variably-pressurized cabins of various realities, considering what is real or surreal.  For stopped-up or popping ears, keep swallowing, hard.   For example...
Consider:  Our species is facing extinction, allowing runaway, nearly-irreversible CO2 buildup in our air and in the oceans.  Given that scientific fact, proven and re-proven time and again, which supposition do you prefer to believe as our rationale:
Is it:  We are committed to fossil fuels because it makes coal and oil companies, and the idle elite, even more mind-bendingly wealthy than they already are -- or, is it:  We are actively terra-forming this planet for the new owner-operators, ready to move in as soon as we can turn up the heat, for crying out loud, and thin out this pesky oxygen more?
Or, consider:  Endless wars have been launched against nearly helpless, kindergarten-level countries by the biggest, meanest grad-school bully on the block.  We've outspent ourselves by trillions of dollars on wars, during a time of considerable social and infrastructure want.
Is it:  We wanted to steal their unmetered oil and rare earths -- or, is it:  We needed to clear phased-dimensional landing sites for The Outer Spacians, as well as clear surface structures forThe Underground Beings burrowing to topside coordinates from below?
Or, consider:  We have used propaganda and fear, via radio and teevee, to turn the nation into unthinking, knee-jerk automatons, creating ignorance, apathy, and superstition in our wake.
Is it:  To help keep the masses opiated, during alarmist crises, such as a peaceful national strike, or a national day of talking and expressing opinions -- or, is it:  We are merely maintaining a pool of raw material to be used by corporations, and our new masters, as drones and 'droids, and soon-to-be-hybridized meat-bots?
Or, consider:  We have allowed the takeover of the country by activist-right-wing judges, religious zealots, weapons cultists, science deniers, by gibberingly-loony lawmakers who become more profoundly inane every day, by members of the pirate-number-juggling class and wealth worshippers who are to the political right of Caligula and Genghis Khan...
Is it:  That's just the way these cycles run, how it goes now and then with people -- or, is it: Um, who says these categories of alleged beings are even people, at all human?
Or, is it:  This is always how it goes, before the truth is finally uncovered, or, uh, created?  What is true here, today, now -- anymore?  Give up?  Go ahead -- skip to the end:
Ladies and gentlemen, meet your new owners, The Outer Spacians:  the quasi-humanoid Darjonites from Zune-Beldax Prime, as well as the ancient Lemurians and Atlanteans!
What -- you didn't know these last had grown from previous end-times experiments?  You didn't know about that survival-need-blending of reptiles, gill-breathers, birds, and humans?
Talk about misinformation!  This is exactly how rumors get started!
Oh, and, as always:  Good luck -- it's getting crazier and crazier out there.  More, all the time.
Posted by Deb Simon at Sunday, July 29, 2012