UPDATED July 21, 2012 - BREAKING: US WRITING NEW SYRIAN CONSTITUTION - "TUTORING" SNC FOR SYRIA TAKE OVER - The US State Department, via the "US Institute of Peace" is working directly with Syrian "opposition" groups to formulate a "government" to put into place, if and when NATO covert military operations succeed in collapsing the Syrian state.
The report written by Foreign Policy magazine titled, "Inside the quiet effort to plan for a post-Assad Syria," indicates that the US State Department-funded USIP plans on releasing a report soon, detailing the US-crafted government being planned. The USIP, which already publishes details of how it has crafted, created, and is continuing to manage and facilitate the NATO-installed client regime now running Libya, constitutes nothing less than implementation of modern-day imperialism.

The USIP claims that it is involved in not only "advising" the Western-backed Libyan government, but that it is also involved in, "constitution making, transitional justice, women rights" and "education." The USIP, US government-funded, will also be writing Syria's "constitution" as well - which they are now calling a "transition strategy document."

Foreign Policy magazine, in an attempt to water down the implications of the US government literally crafting the client regime they plan on placing into the vacuum their US-Israeli-Saudi-Qatari mercenaries (FSA) are attempting to create, by claiming:


The absence of Obama administration officials at these meetings, even as observers, was deliberate.

"This is a situation where too visible a U.S. role would have been deeply counterproductive. It would have given the Assad regime and elements of the opposition an excuse to delegitimize the process," [Steven] Heydemann said.

Unfortunately for this line of thinking, the USIP is in fact a direct functionary of the US government, and more specifically the US State Department, with acting members of the US State Department, including Michael Posner and members of the US Department of Defense, including James Miller, serving on the USIP board of directors. Other compromising BoD members include Amnesty International chairmen and policy makers drawn from Fortune 500-funded think tanks like the Hoover Institution and big-oil's Belfer Center.

To complicate matters further for the so-called "Syrian opposition," prominent members of the movement, including Radwan Ziadeh, is actually a "senior fellow" of the US-funded institution - meaning the opposition leaders were drawn from US institutions, not Syria. The Guardian's article, "The Syrian opposition: who's doing the talking?" has covered this in depth, illustrating that Ziadeh's background is the rule, not the exception. 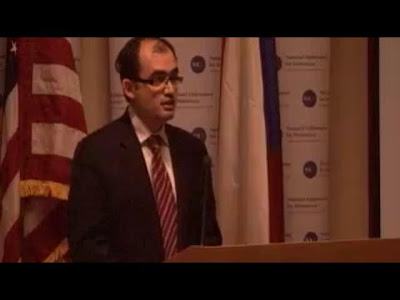 Readers should recall that US State Department's Michael Posner, also serving on the USIP BoD, conceded in an AFP report in 2011 that the US had been funding, equipping, and training "activists" from across the Arab World 2 years in advance for the allegedly "spontaneous" "Arab Spring." These included activists from Syria who created the rhetorical predication for the violence now unfolding across Syria.

This admission by the US State Department and the head of USIP's Syrian project indicates the absolute illegitimacy of the so-called "Syrian opposition," - a complete contrivance of the US government, a manifestation of its foreign policy toward Syria - and in no way representative of the Syrian people. The opposition is literally directed by the US government who is forming for them a government to replace the one they are purposefully destroying through a series of mutually supported economic sanctions, military attacks, and diplomatic undermining.


UPDATE July 21, 2012 - Thierry Meyssan of VoltaireNet updates us on the latest, from Damascus, Syria.

Thierry Meyssan describes Syria's latest unrest as the result of a coordinated NATO-backed terrorist operation aimed at creating confusion and panic, coupled with Western propaganda - and warns that more operations are likely on the way. NATO hopes to break the will of Syrians as well as its military which is still clearly intact despite assassinations and widespread violence. By falsely portraying Syria as "collapsing," the so-called "Free Syrian Army's" foreign sponsors may be able to justify more overt intervention on behalf of their so-far ineffectual proxies.

More from VoltaireNet can be found here.