June 2, 2012 - The Guardian claims in their report, "I saw massacre of children, says defecting Syrian air force officer," that long bearded men with shaved heads were observed by an alleged "air force officer" from inside his house some 300 meters away, storming the village of Houla, Syria screaming, "Shabiha forever, for your eyes, Assad." The Guardian claims this tenuous narrative constitutes, "crucial evidence on the Houla killings." 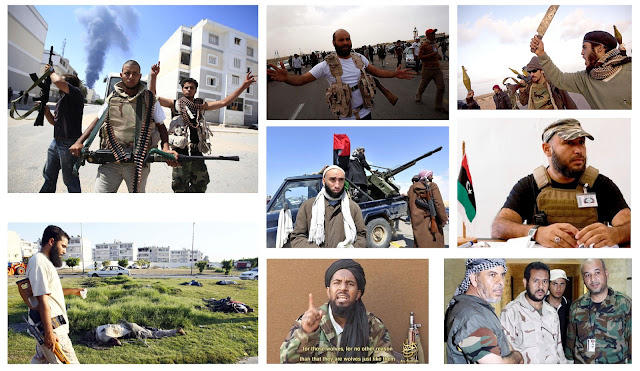 Image: "A lot of them were bald and many had beards. Many wore white sports shoes and army pants." An apt description of the NATO-armed sectarian terrorists that ravaged Libya before traveling to Syria (here, here, and here) to continue their campaign of extremist-driven genocide. Of course, Guardian's "officer" claims he heard, from 300 meters away, inside his house, the militants crying the conveniently incriminating, "Shabiha forever, for your eyes, Assad." (click image to enlarge)

....
The officer claims he saw militants riding in "cars and army trucks and on motorbikes," which contradicts another star witness the Guardian has produced, little 11 year old "Ali" who maintains that militants dismounted from tanks and armored transports to carry out their dark deeds. The Guardian reported, ""they came in armoured vehicles and there were some tanks," said the boy."

This discrepancy is never explained. The officer's identity is never confirmed by the Guardian, nor his story, nor the identity of the bearded men, whose descriptions appear to better fit the foreign sectarian extremists seen in Libya and who are known now to be operating in Syria in large numbers (and here), than pro-government militias. Additionally, the Guardian fails to explain how, from 300 meters inside his home, the "officer" was able to discern the identity of the men, what they were doing, or hear what they were saying.

300 meters (approximately 328 yards) is beyond the range of both a human's ability to discern what a human voice is saying, as well as beyond the ability for human eyes to positively identify strangers as belonging to one group of militants or another. It is over 3 football fields away- and anyone who has been in the "cheap-seats" at a sporting event knows, in much less than that distance it is still very difficult to tell what is going on, let alone claim to hear what people are saying. According to Guardian's "defected officer," he was able to discern the unfolding events from 3 times that distance, with artillery and assault rifles firing, no less. 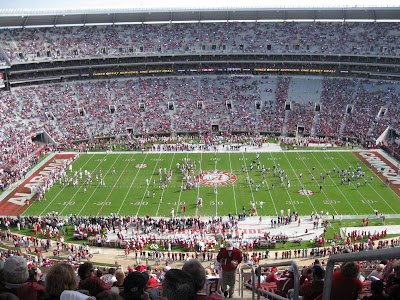 Image: How far is 300 meters? Over three times this. Yet Guardian's "officer" claims to have seen the entire Houla Massacre being carried out by pro-government militias, including hearing them shout who they were, from 300 meters away, inside his house.

....
And for this "officer" to claim he saw the entire massacre, from 300 meters away, inside his house, contradicts yet another recent fabrication that has come out of the Western press, one involving satellite imagery allegedly taken at Houla, Syria.

Magic Eye in the Sky

In the BBC's "Satellite image clues to Houla massacre in Syria," alleged satellite imagery taken from the scene of the massacres is said to show the two sites of the attacks as well as "reported" positions of pro-government militias and "suspected" locations of Syrian artillery positions. The article claims there were two separate attacks, over 500 meters apart from each other. Surely then, Guardian's defected "officer" only saw one of these attacks at best - that is, if the "officer" even exists.

The BBC reported in their article that, "satellite images obtained by the BBC show clearly the location of Syrian military forces around the site of last week's massacre at Houla where 108 civilians died, including 49 children." This attempts to lead readers into believing the images were taken during the massacre. However, the images are taken a day after the attack, when UN monitors were already on scene, and who were already well aware of the positions of Syrian troops at that time. Not only that, but the monitors were in a  better position to discern conditions on the ground than BBC's "eye in the sky."

Of course, the images could not have been taken "during the massacre," and BBC even dates the images as being taken the day after. This is because imagery satellites are constantly moving in relation to the surface of the Earth and only "revisit" any particular location between 1-3 days - sometimes even longer. BBC's analysis comes from a paid consulting firm called "McKenzie Intelligence Services," that was presumably hired by the BBC to access an imaging satellite, and had to settle for the most recent "fly over" of Houla, Syria.

And because of this fact, any imagery before or after the events would be completely irreverent as both artillery and militia positions could have moved half way across the country between windows when a satellite would be overhead. Additionally, these satellite images are stills, not video, so it would be impossible to determine from which direction the militants who carried out the attacks came from even if BBC's satellite miraculously found itself directly overhead as the massacres unfolded. 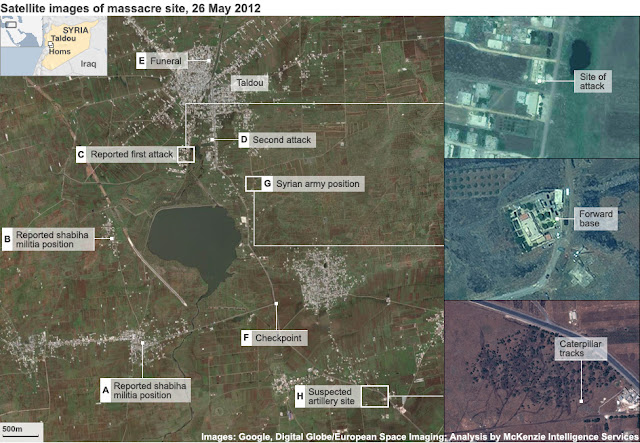 Image: From BBC's article, the images show absolutely nothing of tactical importance, with labels proceeded by classic weasel words like "reported" and "suspected." The propaganda piece attempts to overwhelm readers with techno-babble as well as exploit their ignorance as to how an imaging satellite actually works, when the image itself is taken a day after the attacks, when UN monitors were already on the ground and well aware of the locations of Syrian troops.

....
Both the Guardian and the BBC depend entirely on the logical fallacy of appealing to authority - be it an allegedly qualified witness, or satellite imagery and overwhelming techno-babble. Both news agencies have demonstratively failed to provide any actual evidence to back the narrative they have been irresponsibly reporting since Houla erupted into violence last week.

The BBC has already been caught outright misrepresenting events in Houla, when they used a picture of dead bodies taken years ago from Iraq in their recent Syrian coverage.

A witness account is only as good as the actual evidence supporting it. The Guardian has failed utterly to provide even a tenable witness account, saying nothing of the lack of evidence to support it. BBC's "satellite images" are simply Google Earth images with BBC staff writing over them, for an article that likewise creates a narrative floating freely of any solid factual basis. And the lies will continue to be told until people begin tuning them out and turning to alternative media - or better still, doing the research themselves and exposing the lies faster than the corporate-media can tell them.
Posted by Deb Simon at Sunday, June 03, 2012