Tuesday Terror: Obama is Worse than Simply a “Cruel Hoax”… he’s a terrorist 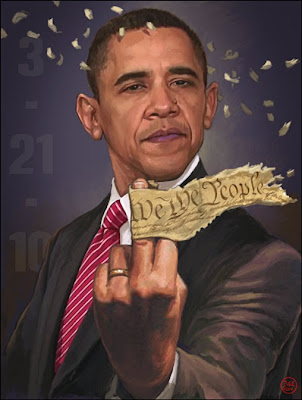 Tuesday Terror: Obama is Worse than Simply a “Cruel Hoax”… he’s a terrorist

Posted on June 5, 2012 by willyloman
by Scott Creighton
Is Barack Obama simply the “cruelest political hoax of our time” as Pankaj Mishra claims in this recent article in Common Dreams, or is he something much worse?
Imagine this:
It’s Sept. 11th 2001. A hundred million Americans just witnessed the collapse of the second Twin Tower to their amazement and horror. As the dust settles and in between the constant repetition of the MSM’s endless replays of the videos of that event, we see dozens of reporters trying desperately to get in close to Ground Zero to catch images of brave citizens crawling onto the rubble piles, covered in grey concrete dust, pulling at the piles of debris searching for survivors.
MSNBC has some start-up flunkie reporter on scene trying his best to make a name for himself, ranting on and on in front of the chaos choosing his ad-hoc cliches with reckless abandon while a small group of first responders starts to center around a victim they found close enough to the surface to actually save.
The reporter positions himself in the shot and the scene starts to unfold.
While he trips over his tongue improvising his Hindenburg moment commentary, suddenly there is a flash coming from the 32nd story window in the background. A bright flash, metal shining in the sunlight, zips from the window straight down trailing a streamer of white to grey smoke in it’s wake of heat swirl.
The flash moves straight like an arrow from a Mohawk bow, straight to the crowd of first responders. The reporter sees nothing, but the audience sees it. When it strikes them, the devastation is monstrous. It blows their bodies 30 feet in the air, the shock wave sending grey dust and pink haze up into a momentary dome.
The shock wave hits the reporter before the sound does and he is shoved past the camera at 3,000 meters per second.
Just before the cameraman is taken out of the scene as well, the last image he captures in his career is of multiple flashes raining from other windows of other buildings surrounding Ground Zero, all heading, like arrows at Custer’s Last Stand, straight down into the crowd of heroes trying to save the few survivors of Sept. 11th.
Now imagine 4 days later. The outrage over the attacks of 9/11 and the follow-up RPG attacks on the first responders is still fresh in your memory, burning a hatred hot enough to melt steel trusses into pools of liquid metal.
A ceremony is taking place at Arlington National Cemetery laying to rest some of the remains of the hundred Pentagon employees who perished that day.
Hundreds of journalists from around the world are gathered 200 feet away, a respectable distance but still close enough to use sound boom mics to pick up some of the audio.
A moment of silence has been asked for as TVs play this scene live to a hundred million homes and offices across the nation.
A child walks up to a close casket graveside as the world takes a breath looking for closure.
From 200 yards away the cameras can’t zoom as much as they would like and in the shot they start to notice an unmarked attack helicopter swooping in from camera right.
The twin chain guns begin to fire as the copter unleashes several hell fire rockets which rush mercilessly toward the mourners. We watch in shock and awe as the chain guns cut the crowd apart and then the rockets turn their bodies into an indistinguishable paste.
Four Star Generals die alongside four year old children bleeding out on the manicured lawn. Dozens upon dozens of lives taken in a moment of abject horror and cowardice.
What would our reaction have been? How would we still be waging the fraudulent “Global War on Terror” had that been the script they used?
Think about it.
One day of the week in our White House, our Peace Prize “winning” president sits around with his trusted advisers and they work out what they call “Tuesday Terror”. That’s when they sit down and figure out drone strikes on various targets.
They’re not working out how to prevent terror on Tuesdays. Not even close. They’re working out how to create terror.
They launch drone strikes with hellfire rockets at targets including known civilians and family members with the explicit order to also fire upon the first responders who, like our heroes of 9/11, rush to the scene to try to save human lives caught up as collateral damage in our “Global War on Terror”.
Then, as if it’s a cruel joke being played on them and us, they plot out the next drone strike on the mourners who attend the funerals of the fallen. They try to deprive them of that little bit of closure, that shred of humanity left to them as they say goodbye to people we murdered.
And your great savior Obama signs off on all of it.

In February, the Bureau of Investigative Journalism documented that after the U.S. kills people with drones in Pakistan, it then targets for death those who show up at the scene to rescue the survivors and retrieve the bodies, as well as those who gather to mourn the dead at funerals: “the CIA’s drone campaign in Pakistan has killed dozens of civilians who had gone to help rescue victims or were attending funerals.” As The New York Times summarized those findings: “at least 50 civilians had been killed in follow-up strikes after they rushed to help those hit by a drone-fired missile” while “the bureau counted more than 20 other civilians killed in strikes on funerals.”
The Guardian reports, the U.S. has killed between 20 and 30 people in these strikes, the last of which, early this morning, killed between 8 and 15. It was the second strike, on Sunday, that targeted mourners gathered to grieve those killed in the first strike:” Glenn Greenwald

How is it possible that anyone, let alone the people who railed with me years ago against the crimes of Bush and Cheney, could turn a blind eye to such cowardly terrorism and bitter cruelty in the world we live in now? Have the last 10 years taught us nothing?
Barack Obama is not just a cruel hoax, though he is that to those who wept and cried on his selection night. For those people, they have forfeited their sympathy long ago.
Barack Obama is not a cruel hoax to the people of the world. He is the real thing. He is a terrorist. He is a REAL terrorist, not one like the 5 guys being tried in Gitmo based on confessions garnered from years of torture.
Barack is the real deal. He’s a terrorist and these days, he’s right up front about it. No apologies, no excuses, no lies. He just tells his supporters he does the most horrific things in the world and they sit back and worry about Mitt Romney and their abortion rights.
Hell of a world, ain’t it?
Posted by Deb Simon at Tuesday, June 05, 2012