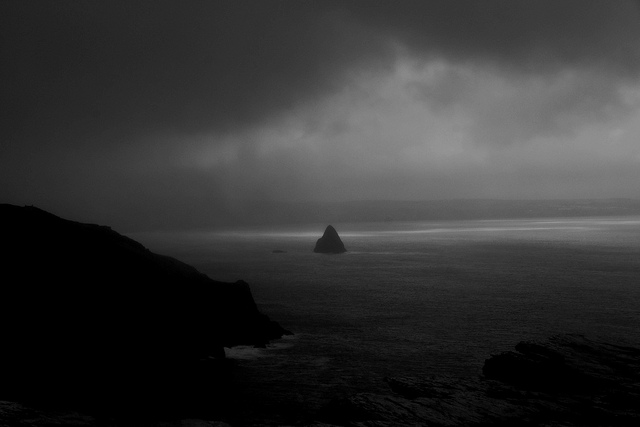 "We are living through times where evil has manifested itself with an almost revelation-like obtrusiveness and power. We have learned to understand the medieval legends about monks who, being vouchsafed a glimpse into hell, would never smile or speak again. The apocalyptic beast let loose has become a reality to our generation, and nobody knows what is still ahead of us." – R. J. Zwi Werblowsky. "Lucifer and Prometheus: A Study of Milton’s Satan." 1952. Routledge & Kegan Paul Ltd: London. Preface.

"Katharsis: thus the Greeks called the state of mind produced by the spectacle of the tragedy, the stillness of heart in which compassion and fear have been dissolved, the purification of the soul which springs from having grasped a deeper meaning in things; which creates a grave and new preparedness for acts of duty and the acceptance of fate; which breaks the hybris as it was seen to be broken in the tragedy; which liberates from the violent passions of life and leads the soul to peace.

The new askesis will not be one of renunciation of the world for heavenly bliss; it will be one of self-domination and tempered appraisal of power and pleasure. The exaltation of life will have to be toned down a little. One will have to remember how Plato already described the occupation of the wise man as a preparation for death. A steady orientation of the life-consciousness on death heightens the proper use of life itself." - Johan Huizinga. "In The Shadow of Tomorrow." 1936. W.W. Norton & Company, Inc. New York. Chapter 21.

The much-anticipated film about the fake Osama bin Laden raid, due out in December 2012, will be called, "Zero Dark Thirty."

The black op Hollywood project will center around the "official" last days of the U.S. government patsy, Osama bin Laden. The propaganda aim of this project is twofold: 1) indoctrinate the world once more about the heroism of the American Empire and the American president, 2) connect a dramatic and meaningful story to the big lie that Bin Laden was killed by U.S. Navy SEALs on the order of Obama in his compound in Pakistan near a Pakistani military base.

Undoubtedly, the mythic portrayal of Osama's life and death will be taken to a higher level. The Bin Laden legend will get the Hollywood treatment.

I. The Peak of Political Propaganda


"Joseph Goebbels: [Speech during the Reich Party Conference] May the bright flame of enthusiasm never be extinguished. It alone gives light and warmth to the creative art of modern political propaganda. This art rose from the depths of the people and in order to search out its roots and locate its power, it must always return to these depths. It may be alright to possess power based upon guns, it is however better and more gratifying to win and also to champion the hearts of the people." - Triumph of the Will (1935). Director: Leni Riefenstahl.

It is not a coincidence that the occultist United States government announced the "official" death of Osama bin Laden on the infamous date of May 1. Adolf Hitler was declared dead on May 1, 1945, exactly sixty-six years earlier. Although he officially died a day before, on April 30.

Joseph Goebbels, Hitler's chief propagandist, did die on May 1. His mastery of propaganda pales in comparison to the propagandists in Hollywood, Washington, New York, London, and Tel Aviv. The Nazis were amateur.

We are living in the age of peak propaganda. The 9/11 black op was the most powerful propaganda event in human history. The official announcement of Osama's death by President Obama on the night of May 1, 2011, was another major propaganda event.

But the global public consensus around the false flag 9/11 events has crumbled. Read "A Collapsing Mythology: The Death of The 9/11 Myth And War on Terror Consensus," for more commentary on this historic development.

In the ancient world, words spoken by kings moved warriors. In the modern world, images circulated by the press moves masses. Osama was an image, and so is Obama. And the story these images tell is not the real one.

Osama was not the Villain that injured America on 9/11, and Obama is not the Savior who restored America to greatness simply by becoming president. Obama lied when he said he killed Osama, a known CIA double agent who was never charged by the FBI for 9/11. The only thing Obama has personally killed while in the White House is a fly. Obama is no more a warrior than Mother Teresa. The sacred word of warrior should never ever be used to describe him, or any politician.

III. Hunting The Already Dead Before Dawn
Former U.S. government insider and counter-terrorism expert Dr. Steve R. Pieczenik told the Alex Jones show in May of last year that Bin Laden was already dead by 2002. His memory and myth persisted in the public imagination throughout the last decade, but he was long gone from the world before Obama became President. Obama was not even a junior Senator from Illinois when Osama had past away. So Obama lied to the whole word by saying that he killed a corpse. Unless Osama Bin Laden has double lives, that's impossible.

The real story that filmmakers should tell is not the Osama Bin Laden raid, but the CIA's beef with reality. That story is so much more interesting and extraordinary. The Obama-Osama drama is a sideshow.

The day will come when the U.S. government's myths will shatter. The same propaganda system that produced the icons of Terror and Hope within the span of a decade is a system that is bankrupt, failing, and on the verge of self-destruction.

IV. Nighttime Legends: The Stuff That Dreams Are Made Of

"The darkness drops again; but now I know
That twenty centuries of stony sleep
Were vexed to nightmare by a rocking cradle,
And what rough beast, its hour come round at last,
Slouches towards Bethlehem to be born?" - Yeats, The Second Coming.

Anyone who looks at an image of Osama bin Laden and feels terror or gets enraged is obviously a child. It is better to invest your fearful energy in real threats to Western society like state power and direct your reservoir of rage at the real state terrorists who staged the 9/11 events.

Bin Laden is a nighttime legend. He didn't deserve the attention that the American people and the world gave him. General Richard Myers said in April 2002 on CNN that, "the goal has never been to get bin Laden." That goal didn't suddenly change nine years later when Obama was in the White House. The fake raid was about getting Obama reelected, not taking down bin Laden and bringing justice to the 9/11 victims.

A nighttime legend is a less fascinating than the real truth about where, when, and how Osama died, but the truth doesn't serve the Obama administration's political purposes and goals.

V. Victory of The Imagination

The 9/11 story and the Bin Laden legend represent the victory of the imagination over facts and truth. Osama's faceless and nameless assassins will be given faces and names in the propaganda film, "Zero Dark Thirty."

It's probably going to be a fantastic film with great explosions and a good screenplay. I can't wait to see it. But you watch the big screen at your own peril. Don't be hypnotized. Don't leave your mind at the ticket counter in the theater this winter when you go to see the movie. Remember that the official story of Bin Laden's death is fake, and tell everyone you know that it is fake.

Sadly, truth is not more powerful than imagination, and authority. But the power of truth is still great. Once the American people and the people of the world are given the facts about 9/11, Bin Laden, and the war on terror by figures of authority they will then be psychologically able to reject the nighttime legends that have been created to justify the wars in the Middle East and accept the truth.

Admitting that you were tricked on such a grand scale is not easy, it is a huge shot to your ego, but it is not impossible. What is impossible is killing a ghost and bringing three towers down with two planes. It is crazy to believe liars and state terrorists. Their words and propaganda films mean absolutely nothing.
Posted by Deb Simon at Tuesday, June 05, 2012